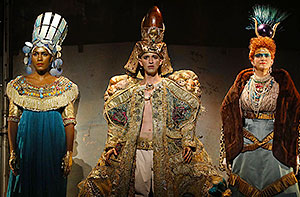 When I was a kid, they sometimes played on TV a movie that made an indelible impression on my young imagination: a Howard Hawks-directed film from 1955 called Land of the Pharaohs. I remember it less for the young Joan Collins as Princess Nellifer (“Her treachery stained every stone of the Pyramid” screamed the ads) than for the terrifying ending depicting the burial scene of Pharaoh Khufu. With a cast of thousands, Hawks did a great job depicting scenes of solemn pageantry, immersing the viewer in an alien, pagan world whose most awesome rituals all revolved around death. Philip Glass’ Akhnaten, playing at LA Opera through Nov. 27, revived some of those feelings of awe, mystery and otherworldliness evoked by ancient Egypt, but in its own novel way.

Akhnaten is the third in Glass’ “portrait trilogy,” the first two being Einstein on the Beach and Satyagraha (about Gandhi). While some might call the music minimalist, Glass rejects that term, describing the work as an additive musical process where he constructs simple arpeggios of three or four notes and repeats them in subtly changing patterns and variations. Actually, I found the music (conducted by Matthew Aucoin) to be quite varied in dynamics and effect, but overall can best describe it as pleasingly hypnotic.

When the curtain rises after a lengthy overture, we are in 14th-century B.C. Egypt, confronted with a framework of stacked containers, the one in the lower center lit up to reveal a “floating” sheet-draped corpse — Amenhotep III — father of Akhnaten. The following scene of his burial is particularly effective, propelled by Glass’ hammering percussion, leavened with belches of tuba and trombone.

Although there is narrative arc — the accession of Akhnaten, his imposition of radical changes (shift from polytheism to monotheism, and moving the royal capital) and his violent demise — this is merely a framework that Glass uses to deliver what seems to be a succession of processions, ceremonies, psalms, proclamations and religious texts. He had lots of help writing the libretto, with credit given to Shalom Goldman, Robert Israel, Richard Riddell and Jerome Robbins. Goldman did the yeoman’s work, assembling the libretto entirely from original sources such as ancient inscriptions, diplomatic letters, fragments of poems and decrees. It should be noted that the text is sung in various original languages with no supertitles offered.

The tall, imposing figure of the scribe (Zachary James) leads us from one scene to another, with opaque, mystical monologues intoned in English. With the slow-motion movement of the characters onstage, the dramatic costumes and lighting, and the unusual music, it all comes off as ritualistic and enigmatic, vaguely reminiscent of Achim Freyer’s 2010 Ring cycle at LA Opera (Freyer staged the debut production of Akhnaten in 1984). This may be off-putting for some who might be looking for more of a standard narrative presentation, but I found it very effective in creating a connection to a distant place, time and culture. From my balcony seat, it was almost as if I were in a hot-air balloon sailing over the Nile, looking down upon the sands of time, blown away to reveal the arcane lives of those who once lorded over Thebes and Amarna.

What is perhaps the most surprising aspect of this opera is Akhnaten himself. Although he appears early in the opera, he does not open his mouth at all for the first 40 minutes. When he finally does, an unearthly high and feminine voice emerges. Anthony Roth Costanzo, who plays Akhnaten, is a countertenor. In Mozart’s day, it is a role that probably would have been played by a castrato in order to get the suitable high-pitched voice. Once you get used to it, it is mesmerizing to listen to. Costanzo’s purity of tone certainly adds to the pleasure.

There is a lot to look at in this production. Director Phelim McDermott, working in conjunction with costumer Kevin Pollard, has created an ensemble that is a visual feast. The costumes of Akhnaten, his son Tutankhamen and the High Priest are particularly splendid. I also enjoyed the chorus, especially when arrayed in a procession of iconic characters striking “hieroglyphic” poses with skulls, animal heads and masks creating a menagerie of ancient animists. They reminded me a little of the zany characters from the Mad Max series of films.

Nor has blood and gore been neglected with one scene involving the removal of organs to Canopic jars and the ceremonial transfer of the bloody heart of the deceased ruler. On a lighter note, there is a lot of ball juggling that occurs throughout the opera. Apparently, depictions of jugglers have been found in early Egyptian tombs, and some think that the balls could represent the sun and, by extension, birth and death. In all the feats of juggling and cross-tossing, I was amazed that not one ball was ever dropped.

One note for parents thinking of bringing kids: the production is R-rated for full-frontal male nudity. I’m guessing that the producers felt it important to establish the gender of the king before he opened his mouth, and before a later transformation in which he seems to have become transexualized to a female. With a strong mother figure, Queen Nye (strangely costumed in quasi-Victorian getups) frequently hovering nearby, there are definitely some Oedipal overtones for the viewer to ponder.

The final two scenes of the opera are unusual in that the scribe appears as a modern-day professor lecturing about the ruins to his students in English. This is followed by the ghosts of Akhnaten, his wife Queen Nefertiti and Queen Nye singing among the ruins to end the opera. In the bereft aftermath of all the splendor we have seen, there is added poignancy when one realizes how Akhnaten’s successors attempted to wipe his memory from history. The final stanza of Shelley’s poem Ozymandias sums up his fate of impermanence best:

And on the pedestal these words appear:
‘My name is Ozymandias, king of kings:
Look on my works, ye Mighty, and despair!’
Nothing beside remains. Round the decay
Of that colossal wreck, boundless and bare
The lone and level sands stretch far away.