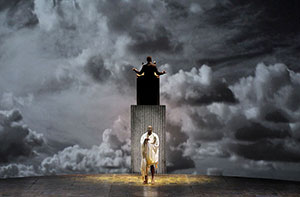 Philip Glass’ Satyagraha is a complicated opera with many layers of thought and artistry. At the same time, it is a minimalist work that does not follow the rules of traditional opera. In other words, it is quintessential Glass. Which means you may already have formed an opinion about whether you will like LA Opera’s current production, onstage at the Dorothy Chandler Pavilion through Nov. 11. If you’re undecided, my advice is: Go in with an open mind. You’ll be glad you did.

Satyagraha loosely translates as “truth force,” the philosophy that guided Gandhi’s idea of political struggle through non-violent resistance. And who couldn’t use a little bit of that? As Director Phelim McDermott said in his program note, “It is an obvious and sad thing that this work couldn’t be more timely. World conflict calls upon us to find new responses to injustice and oppression, and Gandhi’s early story in South Africa is an inspiring example of a different way of engaging with these challenges.”

Violence made the news this week not only in our country but in other nations as well. I attended the opera with a friend visiting from Brazil on the eve of the presidential election in her home country. For her, Satyagraha provided a moment of hope and peace as she tried to bury thoughts of the extremist candidate predicted to win the next day.

Satyagraha completes LA Opera’s presentation of Glass’ “portrait trilogy” of operas about thinkers who changed the world (2013’s Einstein on the Beach and 2016’s Akhnaten). Gandhi tried to make the world a better place, and Glass chose to focus on his philosophy, developed during the years he spent in South Africa from 1893 to 1914, rather than a plot-driven narrative. Each of the three acts of the opera (which premiered in 1980) is dedicated to a “guardian spirit” representing the past, present and future of satyaghara: Russian novelist Leo Tolstoy, Indian poet Rabindranath Tagore and American civil rights leader Martin Luther King Jr.

The LA Opera program does an amazingly thorough job of explaining the opera with its synopsis of the story, the characters, the composer, the music and the design in the program. It is an essential guide to what you see on stage. If you are unfamiliar with Glass or this opera in particular, it helps to have a roadmap for many reasons. Satyagraha is not told chronologically, and there is no dialogue. The vocal text was adapted from the Bhagavad Gita (Hindu scripture) by Constance De Jong, who also collaborated on the book with Glass. It is sung in Sanskrit. Rather than reading supertitles, we see the text projected on the vast corrugated tin wall that serves as the backdrop, as well as cleverly on newspapers (representative of Gandhi’s own Indian Opinion publication) held by singers at key times.

The opera opens in total darkness; even the orchestra pit is unlit. As the curtain opens, a dim spotlight reveals Gandhi, prostrate on the ground, having just been thrown from the “white person’s” compartment of a train in South Africa. From this darkness emerges a visual extravaganza. Windows open in the corrugated wall to reveal a different guardian spirit for each act. Giant puppets (Rob Thirtle) made out of papier-mâché and woven baskets are part of the background action with other performers. One of the most beautiful visuals was a swirling mass of newsprint into which Gandhi disappeared and out of which he then emerged. In the third act, a gigantic human figure is created from tape. There are plenty of visuals to complement the aural tapestry Glass weaves with his characteristic repetitive musical structures. Each scene is meant to be a distinct work of art.

In terms of singing, the cast, including Sean Panikkar in his LA Opera debut, is, as always, unequivocally good. But So Young Park, an alumna of the Domingo-Colburn-Stein Young Artist Program (who was also brilliant in 2017’s Abduction From the Seraglio) stood apart. Her gorgeous voice, so clear and strong, soared to ethereal heights.

So if you’re considering Satyagraha, go! It’s an impressive work of art with visuals that are simple and extravagant at the same time, bold words and ideas, and some beautiful melodies that will stick with you. At the very least, it will give you plenty to think about. At three and a half hours, it’s a bit long, but you can’t quibble with the good feeling it engenders. As LA Opera Director Placido Domingo wrote in his letter to the audience this season, “More than any other art form, opera can move hearts and bring people together. At LA Opera, we are driven by the conviction that opera has the power to change lives.”