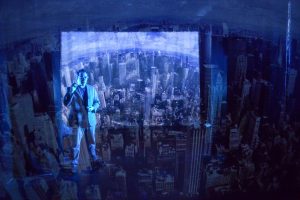 Plasticity is ostensibly a one-man show, yet with some half a dozen distinctly different characters that emerge, fade and reappear at various points within the show, you would be forgiven for thinking multiple actors were on stage. Credit goes to performer and co-writer Alex Lyras, who gives a tour de force performance that inhabits and animates the entire dramatis personae. The play runs through May 1 at the Hudson Theatres.

The one act play explores the nature of thought and the brain’s own “plasticity” — the ability to rewire its neural pathways — via the story of a comatose man who beats the odds to recover. Through ingenious use of lighting, video and special effects, the play is an intriguing mashup of storytelling, pedagogy and technology, inviting audiences to learn about and experience some of the confusion — and clarity — of a brain in the process of healing itself.

David Rosely has had a horrendous accident that has left him in a coma, on the verge of death. As the play opens, we are immersed in a maelstrom of sound, light, patterns and bits of speech — presumably, snatches of memory. It’s a chaotic swirl of sensation, and it’s difficult at first to know what to make of it. It’s only after a succession of appearances by David’s friends and family members that one begins to understand what has happened.

David’s brother is a central figure, as is his friend who speaks pronounced Brooklynese, a psychiatrist and even a shamanic rapping street poet who appears from time to time. Ultimately, the pieces of the jigsaw begin to fall into place, the action becomes less fractalized, and the outlines of the story become clearer.

The characters interact in the hospital and other locations with the help of projections that appear separately on a screen behind the actors and on an invisible scrim in front of the actors. This “scrim sandwich,” as Lyras calls it, is the brainchild of video designer Corwin Evans, who is an adjunct professor of sound design at Pepperdine and head of A/V at REDCAT. Along with contributions from lighting designer Matt Richter, it works extremely well for the theme of the show, with images that move independently yet in harmony within a 3D space, with live action in between. Neural pathways appear to snake through the space, and the electrical charges of firing synapses move from front to back in a sort of interior fireworks of the soul.

Lyras co-wrote the play with Robert McCaskill, who directs Plasticity and who once was his teacher in the art of improv at Chicago City Limits in New York. The pair hit it off and have worked together on a number of projects over the years. With each partner living on separate coasts, their method of collaboration is notable: They used Google Docs, which enables them not only to edit in real time together over the Internet, but to keep track of every change made along the way by each, producing a detailed record of the evolution of the work.

Lyras says writing about the concept of plasticity took a great deal of research, including several consultations with a clinical professor of neurology at NYU. But besides exploring the nature of consciousness and how the brain adapts to injury or disruption, there is an actual story here that provides dramatic interest and a sense of something being at stake. There are end-of-life issues his family and friends struggle with, which many theatergoers will identify with, even though — spoiler alert — David eventually emerges from his coma and re-enters the world he once knew, albeit in a more limited way.

With plenty to see and hear, humor and poignancy, and a novel way of presenting it, Plasticity explores our collective unconscious in a way that is fresh and riveting. Even though there is an intermission, it felt like it could have run all the way through without an urge to squirm. This is the mark of talented dramatists. Recommended.