Review: POP Opera Presents ‘The Monkey’s Paw’ and ‘The Medium’

Pacific Opera Project is presenting a pair of spooky opera shorts to celebrate the season when spirits rise and walk among us. The Monkey’s Paw is a recent adaptation of an old short story, while The Medium is an hour-long meditation on the human costs of spiritual manipulation. The brevity of these pieces requires a structural simplicity that leaves room for only one surprise twist at the end. As a result, it is difficult to connect on a deep emotional level with either opera. But as a whole, there are enough moments of impact and musical interest for an enjoyable evening of music and drama. 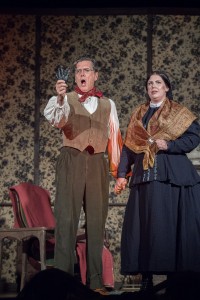 The Monkey’s Paw, W.W. Jacobs’ 1902 short story, has been adapted many times over the years, in plays, movies, radio dramas and at least two other operas. This version, POP’s first world premiere, is by accomplished opera performer and composer Brooke de Rosa, who seems to specialize in crafting musical versions of popular literary fare (she is currently composing an opera based on Alice in Wonderland and a pop musical based on Little Red Riding Hood).

Summing up the plot of The Monkey’s Paw is easy: “Be careful what you wish for.” Mr. and Mrs. White and their adult son, Herbert, receive a visitor, Sergeant-Major Morris, who has just returned from the subcontinent with a strange souvenir — the paw of a monkey that is said to grant three wishes to its bearer. He wishes to be rid of the object, for it has brought terrible consequences. He tosses it into the fire, but after he leaves Mr. White retrieves it and decides to ask for £200. When nothing immediate happens, Herbert departs for work. Later, a man comes to explain that Herbert has been crushed under the wheels of a carriage and that the wealthy owner of said carriage is offering £200 as compensation. Not having learned their lesson about tampering with fate, the Whites wish for the return of their son, and we soon hear an insistent knock on the door. I will leave the third wish to your imagination.

Sung in English with no subtitles, accompanied by Douglas Sumi on solo piano, the words are easy to understand and the story moves quickly. The music strikes the right ominous tones and creates a mood of foreboding, but the actual libretto seemed meandering when sung, leaving one with little sense of any set vocal pieces that could be memorable. The singing standout for me was baritone Phil Meyer, who plays Mr. White (and also appears as Mr. Gobineau in The Medium). 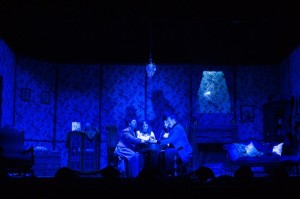 "The Medium" at Pacific Opera Project / Image courtesy of POP

Twice winner of the Pulitzer Prize for his operas, Italian American composer Gian Carlo Menotti, who died in 2007, was perhaps best known for his popular Christmas opera, Amahl and the Night Visitors. Menotti composed The Medium in 1946 after receiving a commission from Columbia University. Pianist Sumi presents Menotti’s score with clarity and alacrity, showing it to be both more assured and organically connected to the drama than that of DeRosa for The Monkey’s Paw.

Maria Dominique Lopez plays Madame Flora, a sham spiritualist, who makes her living by conning wealthy patrons into believing that she can communicate with their deceased loved ones. She is assisted in her fraud by her daughter Monica (Chelsea Friedlander) and a mute servant boy, Toby (David Childs — who also played Herbert in the first opera). It is a pleasure listening to Lopez and Friedlander sing, with Lopez having the darker, more mellifluous voice of the two.

Madame Flora feels a hand at her throat during the séance (in which Monica appears in a veil behind a scrim, impersonating the spirits) and becomes enraged, believing that Toby was the one molesting her. As a relationship develops between Toby and Monica, Madame Flora begins to hear voices and gets increasingly hysterical, to the point of canceling the next séance with her paying clients. Eventually her paranoia reaches a peak with bad consequences for Toby.

As usual, POP has set up tables laden with snacks, wine and waters (although you can pay less for a chair in the back), providing a relaxing, intimate space to enjoy this pair of eerie operas. If you’re not familiar with Menotti’s music, this is a good opportunity to enjoy it. Despite having been written at a time of great abstraction in new music, Menotti’s score is not really Modernist, although there are hints of that. It is tuneful and brimming with interesting musical ideas. DeRosa shows promise as a composer and is evidently at a very productive time in her creative output. I look forward not only to her treatments for Alice and Red Riding Hood, but also for her forthcoming operatic versions of The Picture of Dorian Gray and Sherlock Holmes, not to mention a Missa Brevis as well!