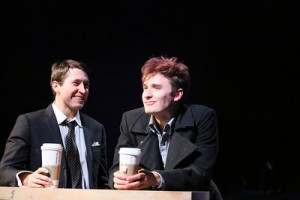 In the Los Angeles premiere of “Slipping,” playwright/director Daniel Talbott has given vivid life to three realistic teenagers grappling with their sexual identities — often with graphically brutal results. This inaugural LA production from the New York-based and OBIE Award-winning Rattlestick Playwrights Theater is onstage at the Lillian Theatre through May 5.

Out teenager Eli has moved from San Francisco to Iowa with his widowed mother Jan to start afresh. Flashbacks depict Eli’s toxic relationship in San Francisco with closeted high school jock Chris. Other flashbacks illustrate the struggles Eli has in making friends in his new school in Iowa.

With not enough revealed in the opening scene to set up the plotline, Kaitlyn Pietras’ dramatic video projections luckily provide the necessary visual timeline distinctions and place delineations to attempt to make sense of the non-linear scenes and multiple settings within the one multifunctional set piece by John McDermott that successfully serves as Eli’s bedroom, a New York coffee shop, an Iowa movie theater, the San Francisco coastline, Jake’s living room, Eli’s living room, Chris’ bedroom, a high school pottery room and a hospital room.

With individual scenes, especially those between Eli and Jake, so well written and acted, one can almost excuse the story flow interruptions resulting from the shifting back and forth between years and cities.

Seth Numrich inhabits the insecure gay outcast Eli most effectively, alternating between defensive shyness and lashing-out tirades — all with total truth, conviction and vulnerability. Eli has such low self-esteem, he allows himself to become the object of homophobic student Chris’ abuse, hatred, lust, love(?). Maxwell Hamilton is perfectly cast as the all-American macho jock, who only in infrequent, unguarded seconds can admit his attraction to Eli.

As Jake, the first guy in Eli’s new high school to attempt to befriend him, MacLeod Andrews jabs and spars charismatically as he tries to win Eli’s bro-ship, as well as Eli’s advice on how to get past first base on his first date with a girl.

Wendy vanden Heuvel has one of the biggest challenges of the cast as she plays the unsympathetic Jan, Eli’s mom and catalyst for many a session on a psychiatrist’s couch.

Be prepared to have your heartstrings tugged and tear ducts flowing, especially during the Eli/Jake scenes near the end. A number of hysterical bawdy jokes will make you laugh amongst the tears (look out for the Michael Jackson rib near the end).

Note: This intermission-less 90-minute show contains smoking and male nudity. Starting on April 21, the role of Eli will be taken over by Wyatt Fenner.