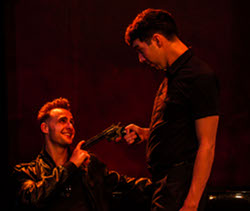 The always-consistent Celebration Theatre successfully mounts the world premiere of Chris Phillips’ “revolver,” a stunning collection of intense vignettes utilizing the titular weapon and loosely tied together by the stage device of a reporter relating his articles on six seemingly unrelated events.

After experiencing Phillips’ “Pieces” last year, “revolver” seems like a sampler of involving, entertaining scenes with a message, waiting to be fashioned into a full-blown play with a beginning, conflicts and resolution — which “Pieces” achieved brilliantly.

Following a puzzling, brief prologue by Matthew Scott Montgomery as the Reporter, the 90-minute play begins with an ugly, brutal and unsettling revenge/hostage re-enactment. Robert Paterno as the avenger holding the gun certainly revels and effectively intimidates in his many levels of mania. Thankfully, following scenes seem to better balance the seriousness of the playwright’s message with entertainment that is easier to sit through.

Next, the hysterical and insightful bit of JC and Judas in heaven features a well-choreographed tango (by Janet Roston) featuring Daniel Montgomery as a repentant Judas and a high-stepping, fast-footed, quick-tongued Terrance Spencer as JC. (Bigger-named divas would surely have lip-synced here!)

Then, in a casting director’s waiting room, Matthew Scott Montgomery IS Nelly, the effeminate gay to Al Jones’ Butch, an A-List Tom Cruise-type actor and (whisper! whisper!) the ex of Nelly. Montgomery takes physical comedy to new heights, being defensively fem while sparingly allowing his inner feelings to bubble to the surface. This section ends with Montgomery uttering “f@%k” four times with four distinctly different emotions and meanings. Very nice!

Paterno and Spencer spar (verbally and physically) with each other while going through a deceased friend’s belongings, each unsuccessfully attempting to assign blame for their friend’s demise on the other.

The Reporter finally gets to interview the infamous gay activist Vince, essayed ever so passionately and genuinely by the riveting John Colella in a heartfelt performance. It’s easy to see why the Reporter is attracted to Vince even beyond his physicality; emotional fervor can be so sexy.

The final vignette is set back in heaven as Matthew Shepard (Daniel Montgomery) greets his killer Aaron (Jones) on his entry into heaven. Jones’ effective, tormented self-flagellation succeeds in eliciting whatever modicum of sympathy one can muster for the perpetrator of such a heinous crime of hate. Can Matthew forgive Aaron? Can Aaron forgive himself?  This is heaven, after all.

Matthew Brian Denman’s doorframes on rollers cleverly serve as backdrops for the various scenes, while Ameenah Kaplan’s videos of the Reporter’s words efficiently emphasize the strength of his printed words. (Maybe video titles of each scene could also be inserted. As involved as I was, it took me a few minutes to realize Daniel Montgomery was not Judas greeting a newcomer to heaven, but Matt Shepard greeting his killer.)

Just like Chinese buffet dining, “revolver” leaves you hungry for more. Any combination of these scenes would make a strong outline/backbone for another incredible play, like “Pieces.” So more, please, Mr. Phillips!