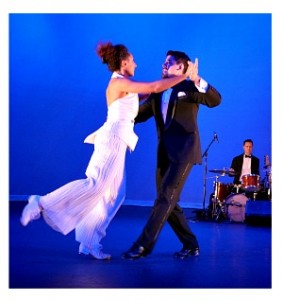 Though internationally respected and renowned, Long Beach-based Rhapsody In Taps foot-clapping company maintains a somewhat low-key presence in the Southern California dance community. Founded and directed by Linda Sohl-Ellison, the company (seven dancers and six musicians) presented their 34th annual Los Angeles season on Oct. 17 at the Aratani Theatre. Presenting two world premieres and seven works from the repertory, the multi-generational audience of 600-plus reveled in every syncopated beat offered by these talented artists.

Finding new and innovative ways to divide a beat into nano-seconds of physical sound, Sohl-Ellison’s choreography was enhanced by the Tim Messina-directed live band on stage. Across the board, production values were high and the artistry just as much so. Costumes by Ro George, the choreographer and Henry Cabrera were sumptuous dips into a brightly colored palette. Lighting design variations by Ric Zimmerman added an abstract glow to the background. And the Tree of Life sculpture by Brock Cilley in “Laughing With Tears” brought a creative dimension into functional relief.

One of the two premiere dances of the evening, “The Body Speaks,” explored corporal rhythm and sound connections. In “Boot Brigade,” the hand jive was used for patting down chests, legs, sides and each other, while taps underscored the audio action. Although, to this observer’s eye, each dancer’s differently heighted boots seemed to detract from the mover’s overall line, Monti Ellison’s singing of the classic “Besame Mucho,” while he played drums, multi-talented tapper Aaron Williams played vibes and Sohl-Ellison researched the underlying cadences in “Heart Songs,” yielded luscious moments of welcomed intimacy.

Williams, again, entertained the audience by dueling musical tableware (spoons) with  Ellison in “Spoonful of Sugah.” Serving like an entr’acte, this short duet created and performed by the two men, continued Sohl-Ellison’s investigation into meter and deconstruction, with a little musical theater thrown in. Earlier, Williams’ dance while juggling and bouncing yellow tennis balls on a small, amplified wooden platform in “Canadian Sunset” was reminiscent of Ed Sullivan’s Chinese acrobats twirling plates high in the air. We all watched with jaws dropped to see if the performer could pull off these amazing feats while keeping the rhythm going throughout his body.

All of the “feets” were great — clear, articulate, heavy and light. In its three-decade history, the company has earned well-deserved awards and recognition, has toured globally and has collaborated with tap masters and musicians of the highest caliber. Beside those already mentioned, the fine dancers included Daphne Areta, Hailey Bundrant, Aaron Chavarria, Taryn Chavez, Hilary Cunningham and Aaron Pardini. The other well-traveled, top-notch musicians were Chris Blondal (drums), Bob Fernandez (percussion), Joe Rotondi (piano) and Bruce Stone (bass).