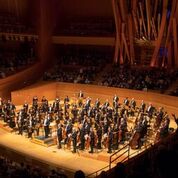 What do you get when you mix a storied American orchestra with a great Italian conductor and exalted German romantic music? A feast for the ears and the soul!

Muti was the quintessential Italian sculptor on Sunday night, making these two great Brahms romantic symphonies even more romantic. Oddly, or at least surprisingly to me, Muti used a score for both symphonies. It’s a small point, but I usually find it a bit distracting to see a conductor turning pages. Nevertheless, Muti’s hands sculpted the music to his — and to the audience’s — liking.

In the third symphony, Muti massaged the score, already filled alternatively with fervor and reverie, to be even more passionate and reflective. He wove the four movements together in such a way as to convey the entirety of a symphony that might otherwise be lost in a more pedestrian performance.

In the second symphony, one could tell that he was holding back the orchestra as one would hold back a rearing horse until the glorious coda of the fourth movement which rushes to a jubilant conclusion. The CSO played as one would have expected, with panache and style.

When Muti first walked on stage at Disney Hall, he looked around approvingly, and then at the conclusion of the Brahms second symphony, after sustained cheers from the audience (which also occurred at the end of the third symphony in the first half), Muti spoke to the audience. Among other things, he said that we must be very proud of our glorious concert hall and that with all the cruelty and aggression in the world, he thought it fitting to play the calming and peaceful Entr’acte No. 3 from the Incidental Music to Rosamunde, D. 797, by Schubert.

After hearing the LA Phil play in Disney Hall, it’s always a treat to hear a visiting orchestra, especially one as renowned as the CSO with an equally renowned conductor. On Sunday evening, it was especially pleasing to hear Brahms with an Italian flair.