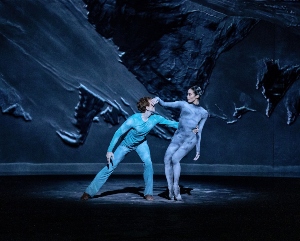 London’s Royal Ballet culminated its two-week residency at the Dorothy Chandler Pavilion with an explosive program of premieres. The first weekend of its stay brought a re-mounting of the 1978 “Mayerling,” choreographed by previous Royal Ballet Director and, later, Resident Choreographer Kenneth MacMillan. This past weekend unveiled a collaborative project with Her Majesty The Queen’s world-renowned artists and those of Company Wayne McGregor. Though this forward-thinking dance maker is also a resident choreographer with the Royal Ballet, his smaller ensemble of performers have forged new dance territory, physicalizing McGregor’s interest in merging technology with live performance. All of this was accompanied by our own LA Phil, under the baton of visiting composer Thomas Adès.

This most recent program began with “Outlier,” a 2010 McGregor creation originally designed for the New York City Ballet and set to Adès’ 2005 “Concentric Paths.” Inspired by the architecture of the Bauhaus period and highlighted by the ferocious violin playing of MacArthur Fellow Leila Josefowicz, the 11-member Company McGregor demonstrated slicing legs and an arresting muscularity in this West Coast premiere. Costumer Moritz Junge dressed the men in variant dark leotard tops, while the women wore body-hugging traditional dance togs in muted greens and an occasional silver splash. Against a background of changing images of colors and shapes designed by the choreographer and Lucy Carter, permutated duets and trios of long body lines and hyper-extended positions revealed a unique movement vocabulary, a cool performing confidence and tight arrangements across a spacious canvas.

“Living Archive: An AI Performance Experiment” introduced the audience to McGregor’s technology-driven adventures. Developed with the Google Arts & Culture Lab, an innovative software ingested the company’s history of movement contours and patterns and suggested options for current and future creative choices that would vary from the past. The dance was performed in front of a changing array of, at first, different-sized black on white letters (as in computer codes) and, later, designs that evoked abstract configurations that breathed, body outlines with motion capture points and explosive bursts of red. Installed by video maker Ben Cullen Williams, this active upstage wall may have been plenty to watch with the second Adès score, “In Seven Days,” played by the LA Phil and guest pianist Kirill Gerstein. The Company McGregor dancers, also given co-choreographer credit, unearthed a more grounded and loose movement lexicon, wearing an ever-changing assortment of colorful hoodies and variations on colloquial streetwear. Nevertheless, one of this reviewer’s highlights was the moment when the lanky performers were silhouetted against this robust backdrop, taking away a little bit of the color to enable a more centered visage. 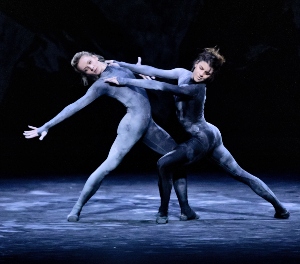 As good as the first two pieces are, the closing world premiere of “The Dante Project Part 1 (Inferno)” layered more than icing on the cake. Along with the creative team of Adès and McGregor, this first of what eventually will be a triptych (Inferno, Purgatorio, Paradiso) brought on the costume and set design of visual artist Tacita Dean. Evoking the Purgatory of Dante’s literature, bringing in a floating interpretation of the 13th-century poet’s Divine Comedy, this collaboration brought the audience to its feet. In hand-painted black and shades of gray tops and bottoms, underworld residents crept, slinked, bounded and clung to one another as the music rose to and from crescendos and quiet moments. The story’s hero (played elegantly by Edward Watson), aided by his friend (Gary Avis), experienced a series of confrontations with these members of Hell. Set up in duets, trios, quartets and whole-group endeavors, the Royal Ballet cast took technique to emotional levels. Though always dimly lit and, at times, infused with a haze, the performers realized the choreographer’s sense of hell — battles, animalistic couplings, hard-edged order and furious chaos. At the end, with the score pounding and the men facing square on to the audience, these devils presented an unstoppable barrage of turning. Each man on a different rhythm, each a different spin from the dancer next to him, each pummeling his own demons.