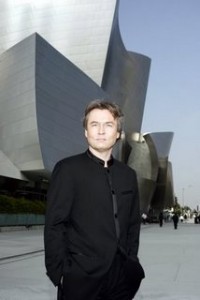 The LA Phil’s longest serving music director, Esa-Pekka Salonen, returned to Los Angeles in his new position as Conductor Laureate for two series of concerts last week. The program this past weekend included works by Paul Hindemith and Richard Wagner.

When Salonen walked on stage for Sunday’s matinee concert, the appreciative audience erupted in an enthusiastic, warm welcome home for their Conductor Laureate, but before they could stop applauding, he launched into the opening Allegro of Hindemith’s Symphonic Metamorphosis on Themes by Carl Maria von Weber.

Hindemith’s composition is based on four little-known pieces by Weber, three of which were written for piano four-hands. But except for the tunes, the piece is entirely original and stunningly orchestrated. It is a perfect concert piece, especially for an orchestra as versatile as the LA Phil and a hall as equally stunning as Disney Hall is. Salonen played the piece straight through without interruption, perhaps because the concert was being recorded for iTunes and he didn’t want to give the audience the chance to fill the space between movements with coughing or even applause.

Salonen’s interpretation, although at times restrained, allowed individual soloists, such as principal flutist, David Buck, and principal timpanist, Joseph Pereira, to shine. But it also provided more effective dynamic contrasts in the music, for example, a more emphatic crescendo in the second movement and fortissimo ending to the last movement. Salonen was truly an ambassador for Hindemith’s composition on this occasion, and I wouldn’t be surprised if many in the audience unfamiliar with the Symphonic Metamorphosis rushed down to the Disney Hall store to buy the CD or will look for this particular performance when it is available on iTunes.

As an aside, after witnessing several concerts conducted by Gustavo Dudamel over the past year, one can’t help making comparisons between the two conductors, which admittedly are sometimes between an apple and an orange, or, in this case, between two very different but equally fine conductors. The analogy has surely been drawn, but the styles of Salonen and Dudamel seem reflective of their countries of origin. Dudamel’s interpretations and podium demeanor are more fiery and dramatic — he conducts with his whole body — while Salonen’s are more controlled — he conducts primarily with his baton. Salonen seems to take fewer risks but also produces more consistent performances. Each, however, produces a unique and wonderful sound from the orchestra.

The second half of the concert included selections from three operas by Wagner, including Prelude to Die Meistersinger, “Was duftet doch der Flieder” from Die Meistersinger, “O du mein holder Abendstern” from Tannhäuser, Ride of the Valkyries and Wotan’s Farewell and Magic Fire Music from Die Walküre, and Prelude to Act III of Lohengrin.

The vocal soloist was the Welsh bass-baritone Bryn Terfel, who in addition to making his Disney Hall debut last week, also happens to be appearing currently as Wotan in the Metropolitan Opera’s Ring Cycle — so he is definitely up on his Wotan.

Terfel, a towering man, who was as tall as the four harps on stage to his left, and almost as tall as Salonen on the podium, also displayed a towering voice that could be heard above the Wagnerian orchestra in Disney Hall, which is no small accomplishment. Except for his slightly annoying emphasis on the “st” sound at the end of some of the German words, for example, küßte (kissed), Terfel moved easily across the dynamic range required in these excerpts and was generously rewarded by the crowd. This larger-than-life bass-baritone seemed forged out of the very stuff of Wagnerian operas.

The three orchestral selections, arguably the two most well-known pieces by Wagner — Ride of the Valkyries and Prelude to Act III of Lohengrin — as well as the triumphant Prelude to Die Meistersinger, were intended to be crowd pleasers, and indeed they were, allowing every section of the LA Phil to show off its virtuosity.

All in all, this hodgepodge of Wagnerian excerpts worked as a whole, and the LA Phil’s favorite son definitely enjoyed and appreciated the adulation from the crowd, although not enough to accede to their repeated calls for an encore.