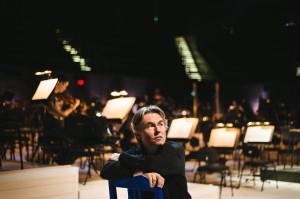 On Saturday night, Esa-Pekka Salonen returned (did he ever really leave?) to Southern California to conduct his old band in three works by Stravinsky: Funeral Song, Agon and The Rite of Spring.

In fact, Salonen is in town for several weeks conducting the LA Phil. Over two weeks, he will conduct all Stravinsky programs. On Saturday, the program was titled “Stravinsky: Rituals.”

When Salonen walked on the stage, he was greeted with cheers from the audience who always welcomes past directors of the orchestra enthusiastically.

What happened over the next little more than one hour of music making was extraordinary. The conductor/composer from Finland gave the Southern California audience a precious gift: some of the best Stravinsky that has ever been heard in Walt Disney Concert Hall.

Salonen began with the first Los Angeles performance of Stravinsky’s Funeral Song, an early work of his from 1908 thought to be lost when he left Russia in the midst of the Russian Revolution. The piece was found in 2015 by a musicologist when cleaning out the St. Petersburg Conservatory in preparation for renovations. Stravinsky said about this doleful early work, which was composed in tribute to his mentor, Rimsky-Korsakov: “all the solo instruments of the orchestra filed past the tomb of the master in succession, each laying down its own melody as its wreath.” Although the approximately 11-minute piece was composed only two years before The Firebird and five years before The Rite of Spring, it already shows the brilliant orchestral abilities of the young composer. Even the opening with the basses playing tremolo in a rising and falling manner reminds one of the opening to The Firebird.

What a treat to hear a work by Stravinsky live for the first time, especially one so haunting and beautiful. Salonen and the Phil gave an inspired performance, perhaps realizing that they were introducing the audience to this “new” work by arguably the greatest composer of the 20th century, who, it just so happened, made Los Angeles his home for 29 years from 1940 to 1969.

Salonen closed out the first half of the concert with Agon, a work that couldn’t be more different than Funeral Song, which is not surprising as they were composed 50 years apart. Where Funeral Song was melodic and gloomy, with Agon Stravinsky employed the 12-tone technique. In fact, the ballet is all about twelves: 12 dancers, written in 12 sections (with a prelude and two interludes) and composed using the 12-tone system invented by Arnold Schoenberg, Stravinsky’s neighbor in Los Angeles. Part of Stravinsky’s genius is that the music sounds remarkably tonal. Agon, composed in 1957 while Stravinsky was living in Los Angeles, is an abstract work based loosely on 17th-century French court dances. In fact, Stravinsky retained the names of the dances (e.g., saraband, gaillard, etc.) in his composition, which brilliantly fused the ancient musical style with the more modern.

Salonen and the Phil seamless moved between the moody Funeral Song and the abstract Agon. They realized the crispness of Stravinsky’s score, and Salonen conducted with the same mathematical precision Stravinsky employed in composing it.

Of course, the climax of the evening in more ways than one was The Rite of Spring. Beginning, deceptively, with the famous bassoon solo played evocatively by principal bassoonist Whitney Crockett, Salonen (and Stravinsky) took the audience on a wild, exhilarating ride culminating with the Sacrificial Dance. Salonen’s Rite reminded one that the music, which caused nothing short of a riot when it was premiered in Paris in 1913, still sounded scandalous. More than 100 years later, one can still understand how the sexually infused violence of the music had the effect it did even in liberal Paris. Salonen took the already-violent music up a notch in places such as in the Glorification of the Chosen One, where he had the bass and timpani drums sounding like cannons. It was a no-holds barred performance that left the audience spent and exhausted, but equally thrilled.

With the last fortissimo bang of the score, the audience erupted in cheers and rose to their feet. Few people left during the thunderous applause. Salonen turned around and pointed with his thumb back to the orchestra with a look on his face that said, “How about this orchestra?” Of course, even though the orchestra is now Dudamel’s, there are still some in the orchestra who were brought in by Salonen, so he might have been saying, “How about my orchestra?” No matter; the evening was not one soon to forget.