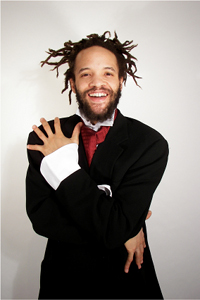 Savion Glover is the best tap dancer alive. His mentor Gregory Hines thought so. On Saturday night, Glover, Marshall Davis and Robyn Watson performed “Bare Soundz” on three mini, square platforms in the form of a triangle on the stage at the Valley Performing Arts Center on the campus of California State University, Northridge. It was as if each audience member had received a golden ticket to attend the greatest tap jam on Earth — 80 minutes of nonstop tapping, including improvised solos, group choreography and trading bars.

Glover champions a new school of tap thought: all tap, all the time. Unlike Hines and another mentor, Sammy Davis, Jr., Glover focuses solely on tap. His feet are his instrument. In fact, his whole body is his instrument. Sometimes he smiles; other times he contorts his face to reflect another emotion or impulse. His hands act as balancers, either swinging by his side or hovering loosely in the air, palms up or down, depending on what he’s trying to say.

Which leads me to two of Glover’s greatest contributions to the art of tap. He wants us to hear the music in tap, but also be aware of the conversation. At times, his tap sequences sound like the heaviest rainstorm. And yet, what we hear is probably different than what he hears, or what he’s telling us. The rhythms he performs differ so subtly, it’s difficult for the average listener to comprehend just how sophisticated his sense of timing is and how complicated his thoughts are. His tapping has reached a level beyond entertainment. In Glover’s capable hands, and those of his partners on stage, tap becomes a form of communication, an outlet for expression, which is best demonstrated when the three dancers trade bars on the same small platform. They appear to be having a ball, sharing jokes, posing challenges and experimenting with new steps.

After a night of taps pounding and sweat pouring, I couldn’t help but think I had witnessed a cool, new millennium version of the bionic man.