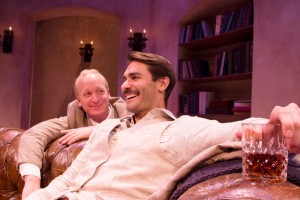 F. Scott Fitzgerald and Ernest Hemingway were a true odd couple, friends at some points and enemies at others — sometimes both on the same day. It’s a reality probably not too hard to understand when you consider their larger-than-life personalities, their desire for fame, their vacillating egos and insecurities, and their alcoholism. Playwright Mark St. Germain does a remarkable job of capturing the essence of these two literary giants wrestling with each other and their demons in “Scott and Hem,” onstage at the Falcon Theatre in Toluca Lake through Nov. 15.

In “Scott and Hem,” St. Germain fluidly blends fact and fiction in a fine cocktail of artistic truth, quoting the writers themselves and incorporating actual events in an imagined meeting in 1937 Hollywood. The 75-minute interchange encapsulates the highs and lows of two of America’s most famous authors in a highly entertaining way, making us laugh as Fitzgerald crushes Margaret Mitchell’s “Gone With the Wind” and then practically gasp as Hemingway talks about his father’s rifle (sent to him by his mother). The characters veer back and forth between friendship and rivalry throughout the evening, but the subtle progression between these moments makes it work. Of course, Fitzgerald has just committed Zelda to a psychiatric facility, and insanity is never far from mind.

Kevin Blake (Fitzgerald) and Ty Mayberry (Hemingway) not only embody these literary celebrities, they also look like them, judging by the photographs of the actual writers on the playbill. Of course, Hemingway is notorious for having been a macho type who loved hunting, but the characters never fall into caricature in St. Germain’s script. Mayberry is equally adept in vindictive and vulnerable moments. Blake and Mayberry skillfully pull off a range of quick-change, and sincere, emotions, quickly building realistic characters before our eyes, with expert direction by Dimitri Toscas.

Eve Montaigne, the studio representative typing up the movie script Fitzgerald is working on while simultaneously monitoring his sobriety, offsets the two dueling wordsmiths. Jackie Seiden is perfect in the role, often grabbing the men by the proverbial you-know-what and delivering some lines as great as the famous authors’, such as “Writers like you make actors look like adults.”

Set design by Francois-Pierre Couture features a very real, or very fake as Hemingway calls it, Spanish-style apartment in Hollywood’s fabled Garden of Allah. Sound designer Robert Arturo Ramirez creates the ambiance of the famed hotel with sounds of a Fourth of July pool party (complete with famous personalities mentioned or called out to by Scott and Hem from the balcony).

Scott Donaldson, who authored biographies on both men and then wrote about them together in “Hemingway vs. Fitzgerald: The Rise and Fall of a Literary Friendship,” said: “Hemingway felt a compulsion to dominate, to lord it over others, and Fitzgerald had a complementary need to be dominated. If Ernest liked to kick, Scott wore a sign on his backside saying ‘Kick Me.’” It’s an interesting frame through which to watch this play. But it’s up to each of us to decide who fares better in the end.