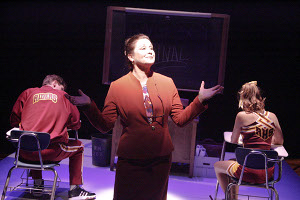 “Sex & Education,” Lissa Levin’s sharply written play in which a high school teacher attempts to convince an indifferent jock who was awarded an athletic scholarship about the importance of good grammar and overall knowledge, gets an entertaining mounting at the Colony Theatre. On the last day of her long, uneventful and unsatisfying teaching career, Miss Edwards decides to teach her final lesson of English (or is it of survival?) after intercepting a profanity-laden mash note from the star jock to his cheerleading girlfriend during their English final exam.

Stephanie Zimbalist excels as Miss Edwards, demonstrating passionate love of the English language while commandingly lecturing Joe, broodily portrayed by William Reinbold, when he is detained after school. Miss Edwards arrives at the clever conceit to use the mash note as the basis of a proper composition lesson.

As Andrew Barnicle directs, there’s never any doubt that Zimbalist’s Miss Edwards will triumph over Reinbold’s Joe in the end, downplaying some built-in levelers Levin has written for Joe to give him the upper hand.

The stage device of having Hannah the cheerleader (Allison Lindsey) cheering simultaneously in the gymnasium to punctuate the points Miss Edwards attempts to make to Joe breaks the monotony of Miss Edwards’ constant haranguing. When one can look past the Hollywood casting of 20-somethings as high school students, Reinbold and Lindsey do handle their final scene, their first scene with actual emotional depth, with effective aplomb. This scene, which the audience mistook for the final scene, would have made for a proper closer. But, alas, Miss Edwards’ actual closing zinger of this intermission-less 90 minutes would have been missed.