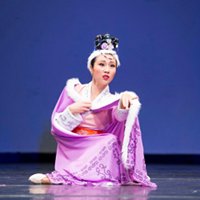 Colorful Shen Yun billboards liberally displayed all over Ventura and LA Counties promised exotic entertainment on a grand scale — I imagined a sort of Chinese “Cirque de Soleil.”  Those billboards and a whiz-bang marketing campaign worked — although the ticket prices were astronomical, the shows were completely sold out several days before the troupe’s Southern California performances in Thousand Oaks, downtown LA’s Dorothy Chandler Pavilion and Costa Mesa.

Shen Yun’s mission is “reviving the essence of 5,000 years of Chinese culture,” which it asserts has been nearly demolished by the Chinese Communist government. Founded in New York in 2006 by expatriate Chinese Falun Gong practitioners living in North America, Shen Yun began touring in 2007. The company’s performers practice the Falun Gong (Falun Dafa) spiritual discipline, and performances around the world are hosted by local Falun Dafa Associations.

Given all the hoopla, I was underwhelmed. I must say that the brilliantly colored costumes, robes, capes, headgear and scarves and the intricate props are a show in themselves. And the multimedia projections, some with moving elements that integrate with the live performers, seem pretty magical. But the spectacle falls far short of the hype.

The show’s extensive advertising, substantially underwritten by followers of Falun Gong, does not mention the religious-themed content of the performance. The 20 or so individual sections of the show feature an intriguing blend of Western orchestral and Chinese solo instrumental music, vocals and various forms of ethnic and classical dance to illustrate Chinese history, myths and legends.  Two interpreters act as emcees, offering gratingly cheery narration. The “operatic” singing is difficult to listen to, and is made no more palatable by the projected English translations of song lyrics that create a stream of repetitive religious proselytizing and protest propaganda. A couple of disturbingly violent vignettes depict the “persecution and murder of Falun Gong practitioners” in contemporary China.

The political harangue seemed to make the audience uncomfortable, and several families with children left at intermission. For the price, I was disappointed. Still, my appetite for authentic Chinese music and dance will have me seeking out other opportunities.