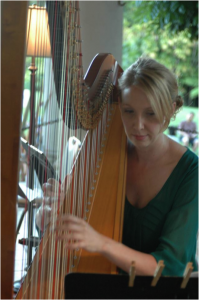 Southwest Chamber Music closed its 20th-anniversary Summer Festival at The Huntington Gallery on Sept. 25 with a unique contribution to the centennial birthday celebrations honoring Benjamin Britten throughout Southern California as part of the Britten 100/LA concert series.

Tenor Jon Lee Keenan and harpist Alison Bjorkedal were brilliant in their performances of Britten’s Eight Folk Song Arrangements (1976) and A Birthday Hansel (Op. 92, 1976).  Bjorkedal is among the finest harpists in Los Angeles, and her performance was superb. She and Keenan were expressive and matched perfectly to the character of the songs.

The venue is outdoors on the porch of the former Huntington family home, now art gallery, but the acoustics are surprisingly fine. Framed by the evening din from the summer greenery and picnickers scattered about the great lawn, the delight of Britten’s arrangements immediately buoyed a great opening mood. Keenan’s voice was sonorous, yet still crisp and clear; fully intelligible, expressive with a surprising dynamic range. The harp was crisp, and fine nuances in timbre and touch were preserved.

A Birthday Hansel was certainly appropriate for a birthday concert; it was written for the 75th-birthday celebration for Queen Elizabeth. The songs are distinctly modern, but tuneful with a dissonance that was pleasant and reminiscent of Carl Nielsen at times, especially on Bjorkedal’s harp. Her artistry and mastery of the instrument were outstanding; the connection of musician and instrument flowed seamlessly together in her music.

Bravo! to Keenan and Bjorkedal on a memorable performance, and for a great contribution to the Britten 100/LA celebration.

Britten’s Eight Folk Song Arrangements opened the program, and were followed by L’Autunno. (Southwest Chamber Music staged the U.S. premiere of L’Autunno in 1990.) After the intermission, with the portrait gallery and Huntington home open to the concertgoers, A Birthday Hansel was followed by Mládí.

L’Autunno is chock-full of musical associations and dramatic references, and the ensemble kept the drama en vivo; Von der Schmidt never lost the focus amidst the sometimes-chaotic composition. Hentze’s musical argot includes everything from contrapuntal atonal sequences to a quote of Bach’s Magnificat. He was a master of timbre and dramatic effect, and the musicians were versatile and virtuosic, capturing the intricacies of this diffuse force. The ensemble had a character that transcended technique; the music had an expressive soulfulness that is unique to the winds.

Jonathan Davis was engaging with his oboe d’amore. There was a cadenza for just about everyone at some point in the program. Clarinetist Jim Foschia was outstanding with his expressive cadenza, but Judith Farmer’s extended contra-bassoon solo was a remarkable thing to hear as she plunged the sonic depths.

As you could surmise from the instrumentation, the French horn and Wagner tuba have a salient role, and although a driving force at times, Andrew Pelletier was also graceful among the winds.   Von der Schmidt congratulated Pelletier on the remarkable performance as they left the stage.  The recognition was well deserved.

Incorporating prosodic rhythms taken from spoken words into musical themes was a unique Janáček device, and he based Mládí on the prosody of the spoken Moravian words for “Youth, Golden Youth.” The ensemble was bold and lively in its interpretation, and the energetic performance was the highlight of the program.

Bravo to the winds! A wonderful concert and conclusion to the 20th Summer Festival year!