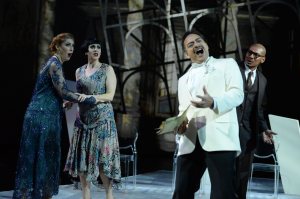 Stewart Copeland’s “The Invention of Morel” at Long Beach Opera is the second opera premiere I’ve seen this month. The first was Andrew Norman’s “A Trip to the Moon” at the LA Phil [see our review]. Both blew me away. Each was very different, but both were accessible, imaginative and entertaining. And, oddly enough, both fit in the sci-fi genre, broadly speaking. [As a side note, I also loved Opera National de Paris’ exciting production of “La Boheme” set in space and on the moon (with the LA Phil’s Gustavo Dudamel as music director)!]

Anyway, back to Long Beach, where 24 hours after the March 17 co-world premiere of “The Invention of Morel,” I am still excited about this opera. When will a recording be available?! Composer Copeland and co-librettist and director Jonathan Moore have performed some magic over the past three years: They have transformed what Jorge Luis Borges and Octavio Paz called the “perfect” novel, “La Invencion de Morel,” written by Argentine author Adolfo Bioy Casares in 1940, into a spellbinding little opera.

At a compact 90 minutes, it floats by like a hallucination. The libretto is poetic, effectively highlighting the themes, symbols and surreal plot of the novella. The music is at turns, and sometimes simultaneously, symphonic, jazzy or rocking, and the singers are able to show off some of the best of the form.

With glimpses of “The Island of Dr. Moreau” and “The Tempest,” the plot is a wild ride. Ghost-like figures appear and disappear, and the mystery of a futuristic scientific invention unfolds at the end. But not before philosophical musings on life, love, death and immortality entangle the Fugitive and the island guests like quick-growing vines: Do we need to be seen to exist? Doesn’t everyone want to live forever?

The decision to split the Fugitive into two characters, the Fugitive and the Narrator, was inspired. The Fugitive acts out his past story, while the Narrator provides the insights from his diary. Andrew Wilkowske and Lee Gregory both nailed their parts. They are the same man, sometimes singing in duet, one whose flesh is deteriorating, while his doppelgänger from the past remains eternally the same — something Dr. Morel promises his invention will deliver. Morel hints to his guests: “None of this will matter… forever” and “You will learn tonight the full story of this island. And then nothing will be the same. And everything will be the same.” Suffice to say, Morel’s invention seeks to capture the image and soul of a person, but destroys the physical body. A lot to puzzle out, but also a roaring good time.

The 17-piece orchestra, complete with drum set, of course, and led by LBO Artistic Director Andreas Mitisek, was sensational. The singers were phenomenal: In addition to Wilkowske and Gregory, other standouts were Jamie Chamberlin as a riveting Faustine, the woman who captures the Fugitive’s heart without a single interaction, and Nathan Granner, whose tenor is as bold as his character — a scientist so enamored with his invention that he never stops to think that his friends might not want to spend eternity with him.

This isn’t Copeland’s first foray into symphonic or operatic composition. Copeland, who is a co-founder and the drummer of The Police, has already proven that he is more than merely a rock star (as if that’s not enough) with five Grammys and millions of records sold. And it’s no surprise coming from the guy who got the No. 10 spot on Rolling Stone’s list of 100 greatest drummers of all time that, in “The Invention of Morel,” the drum parts are awesome — they are the incessant heartbeat of the opera.