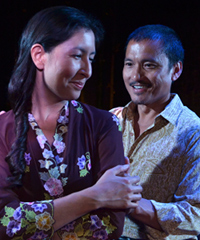 Henry Ong’s latest riveting drama, “Sweet Karma,” gets its well-mounted West Coast premiere at the Grove Theater Center, with a strong cast led by Jon Jon Briones, grippingly sensational as Vichear, a fictional counterpart of the real-life Dr. Haing S. Ngor — the Cambodian doctor who won an Oscar portraying himself in the 1984 movie “The Killing Fields.”

Ong does not hold back in showing the unsympathetic warts of Vichear, beginning with his murder and going backward into his life. As a matter of fact, by the time the play does end with the murder depicted again, any sympathy/empathy one might have had for Vichear has been totally eviscerated by the events in the preceding 85 minutes. Vichear comes off as self-centered and self-serving, even though he’s taken the noble profession of a doctor. Vichear leaves a patient to die on his operating table; and, in a decisive moment with the life of his beloved in his hands, Vichear chokes. Vichear’s attempt to make the right decision in the final moments of his life comes off as too little, too late. “Karma” seems to refer to his murder.

After the opening scene of Vichear’s murder, Devi (a.k.a. The Guide) leads and negotiates Vichear back through his life, re-enacting his major milestones. As Pauline Yasuda plays Devi, she’s at all times teasing, encouraging and deliciously mysterious, while deftly guiding Vichear to re-live his memories.

Rainbow Dickerson gives full three-dimensionality to what could be the stock role of the subservient, submissive Cambodian woman, Vichear’s beloved Suriya. My favorite moment of the evening has to be when Suriya shockingly, yet most justifiably, repeatedly strikes Vichear. Yay! She’s not just a doormat!

Besides the good fortune of having such a loving Suriya in his life, Vichear also lucks out a second time when picked to co-star in the Hollywood production of “The Killing Fields.” If it weren’t for the extreme patience of the film’s director (played by Kennedy Kabasares with an un-identifiable and inconsistent accent), Vichear never would have had the chance to win his Oscar for Best Supporting Actor. (Kabasares fares better in his other roles as murderer and rapist.)

As the other player in this play’s Greek chorus, Jully Lee shines in her many distinctly different characters, especially the very Hollywood casting agent Lesley and the very proper Oscar presenter actress Linda Hunt. Someone get her an audition for “Saturday Night Live”!

The horrors of the Khmer Rouge tortures and atrocities get symbolic and verbal graphic depictions with great assist by sound designer Dennis Yen.

My second favorite moment is the surprise reveal of Devi’s true identity. Didn’t see that coming!