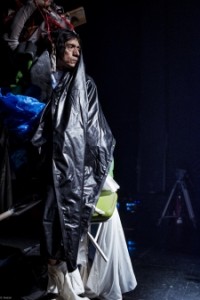 On Oct. 8, there’s a man on rollerblades crouching on the pavement behind a signature blue Ikea bag outside REDCAT’s box office. My first instinct is to allow 10 feet between me and the unidentifiable man in the event that he is hiding, oh I don’t know, maybe a weapon (remember the Ikea bag draped over head). But my doubts subside after seeing how methodical his gestures are: slowly unfurling his body with the guided intention of an all-knowing shaman. I’m relieved that this isn’t a public meltdown, but rather a spiritual journey. The man in the rollerblades is Takao Kawaguchi, a Tokyo-based dancer and performer that is channeling the revered Butoh master, Kazuo Ohno.

Saying the performance is a tribute is like saying Whitney Houston’s rendition of Dolly Parton’s “I Will Always Love you” is simply just a cover. When a talented artist imitates her idol, the copy metamorphoses into an original all its own. That’s really the message behind “About Kazuo Ohno,” which transcends artist, place and time and, rather, lives somewhere between the mind and spirit.

Kawaguchi leads the audience from the sidewalk to the lobby that is staged to look like a drifter’s abandoned home. There is an array of mundane objects, including empty water bottles, plastic bags, egg crates, a ripped tarp and a garden hose lining the floor that serve as corporeal practices of our existence. As Kawaguchi fervently dances with the contorted hose and balances a bottle on a spatula, he abandons the idea of “self.” Call it new age or zen, but the philosophy of Butoh encourages one to suspend personal beliefs for the chance to universally connect.

Speakers blare Elvis’ velvety love song “Can’t Help Falling in Love With You,” and everyone Snapchats Kawaguchi swiftly gallivanting down the aisle of people. And just like a good Snapchat, the magic of dance pulsates in the ephemeral. Suddenly, Kawaguchi runs inside the theater, and everyone follows this frequency of energy.

Once seated, I look towards a stage that’s bare except for a mirror and a clothing rack with flowy, cream-colored robes and capes. Silence brings our attention to Kawaguchi, who disrobes his warm-up attire and transforms into an all-white look of tights, a flowy ribbon scaling his spine, complete with Tim Burton-styled hair. A screen projects the title: The Dream of the Fetus of My Mother (1991), and Kawaguchi inches cautiously towards us, holding a lone flower towards the sky as a haunting soundtrack of wind whispers and screams from the distance — truly religious to witness. What’s particularly fascinating is that he pervades molecular movements with such a fierceness that subtle gestures feel magnified, even cosmic.

During the next several hours, Kawaguchi channels different personas featured in Ohno’s work. There’s the Spanish dancer, Pierrot the clown in a liturgical robe, an orchestra conductor look. Costuming swims in the gender-fluid waters that Kabuki theater is known for, a.k.a. “drag.” Implying that the body is a vessel, the pendulum swings big from feminine to masculine. At one point, he applies dramatic makeup in front of a mirror, laughing to himself, maybe even laughing at the construct of society’s preconceived notion of gender roles! Are we watching Ohno, Kawaguchi or Rupaul?

Reality slips away and this mythical feeling is further explored in the soundtrack, which artfully plays with classical music and pre-recorded sounds of past performances. On loop is an echo of creaks, thuds and audience applause, which brings the awareness back to the concept of “what is a copy?” However, this is too strategic, self aware and destructed to be a copy or a simulation.

Coming to a close, a projected video shows Ohno’s son controlling a marionette puppet of his father to the tune of Elvis’ “Can’t Help Falling in Love.” My heart is heavy, for I know that this world is about to disappear, a world that Kawaguchi fully imagined with his heart and soul.

Ohno had this to say about his art: “The best thing someone can say to me is that while watching my performance they began to cry. It is not important to understand what I am doing; perhaps it is better if they don’t understand, but just respond to the dance.”

Since I didn’t get a chance to tell you during the night of your performance, I’ll tell you now, I smeared-my-mascara cried. Thank you, Kawaguchi.

For information about upcoming shows at REDCAT, visit www.redcat.org.