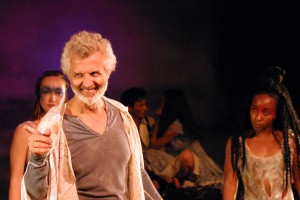 It is said that Shakespeare’s The Tempest is one of the most adaptable of the Bard’s works. Indeed, some 46 operas have been inspired by it along with numerous orchestral works, poems, paintings and plays. Tempest Redux — a co-production of the Odyssey Theatre Ensemble and the New American Theatre onstage at the Odyssey Theatre through April 10 — is firmly in the interpretive family of adaptations, as evidenced by its dreamlike quality and the liberties it takes with rearranging the text. While it may gloss over the more literal aspects of the play, this production does leave you with a variety of images and characterizations that are at once striking and indelible.

Tempest Redux is a vivid example of how influential a director can be in pulling off a fresh version of Shakespeare. John Farmanesh-Bocca, the founder of the Not Man Apart Physical Theater Ensemble not only directs the play, but he also adapted it, and is the choreographer and the sound designer. This is the latest in a series of Shakespearean reimaginings by Farmanesh-Bocca. Other Shakespeare works he has adapted and directed include Pericles Redux, Titus Redux and Richard III Redux.

The director’s understanding and use of physicality in his productions is very evident here. From the beginning, we get a sense of certain characters, particularly Ariel and Caliban, as dancers, moving across the stage in a completely stylized way. It adds another layer to the visual and particularly the symbolic qualities of the play as the story unfolds. This very physicality, however, diminishes the importance of what is happening in the text (which is still delivered in the Elizabethan English). If The Tempest can be said to touch upon such subjects as colonizer vs. colonized, dynastic succession and virtues of the ideal ruler, Tempest Redux, by its reliance on symbolism and the unconscious, deemphasizes these societal questions in favor of a more personal exploration of the ties that bind us together — and what we gain and lose thereof.

Jack Stehlin’s Prospero provides a solid center to the play with his gaunt, magisterial mien. Many of the other actors play dual roles, a choice that, in addition to keeping the cast small, emphasizes the duality, or even tri-dimensionality, of certain roles. Particularly notable are the representations of Ariel, the magical spirit, and Caliban, the fearsome, monstrous slave of Prospero. Ariel is played by three female actors who appear together and speak together. Their “voice” is actually an echo-drenched recording that they lip-synch to. It provides an eerie otherworldliness to the role eminently suited to a fairy-nymph.

Caliban is the standout dual role, however.  The bizarre creature is played by Dash Pepin and Willem Long. The two actors writhe around each other in all manner of odd acrobatic positions — connected, yet separate. They take turns saying the lines and when they do actually pull apart, they are quickly drawn back together, as if by an irresistible magnetism. The result is very fluid and organic, a superbly rendered multi-dimensional brute.

The sound and lighting work well to help create this strange world we find ourselves witness to. The storms at the beginning and end of the play are immersive through clever lighting and effects. The music is as unexpected as what you might expect in a dream — at times amorphous and lyrical, and at other times specific and humorous, with snatches of cabaret, EDM and vocal music.

Altogether, the effect of Tempest Redux is powerful — we are served humor as well as gravitas, love with betrayal, hope with unbearable loss. As you leave the theater, you might not be able to explain everything you see, but you will know that it wove a special spell perfectly befitting an enchanted isle. Recommended.