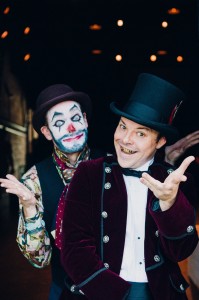 In keeping with his amusingly subversive approach to theater, Tim Robbins, artistic director of the Actors’ Gang, is calling this the “Season of Thugs, Outcasts and Heavenly Myths.” To kick it off, he is presenting Captain Greedy’s Carnival (A Musical Nightmare) through Nov. 11 at the Ivy Substation in Culver City. Playwright Jack Pinter uses a carnival sideshow and its attendant shady games of chance as the conceptual framework to deliver a broadside against predatory capitalism. It’s an interesting concept, and the visuals and music are wonderful; however, the “message” as put forth in the songs’ lyrics is blunt and incessant, which ultimately tilts the production more toward the side of agitprop than entertainment.

At a time when Barnum & Bailey is no more and clowns are evil killers, the circus sideshow is a quaint anachronism, a part of American culture that is increasingly unknown to the youth of today. I’m old enough to have gone to several of them, and they hold an undeniable allure for their celebration of freaks, misfits and oddities. With mustachioed strongmen and calliope-style music by Roger Eno, Captain Greedy’s Carnival has a preserved-in-aspic feel that connects us to the heyday of the carnival sideshow in the 1930s. The songs evoke vaudevillian traditions, and the retro costuming and old-timey carnival posters hung about the theater might lead you to think we are staying in the ’30s. But that’s not right.

Soon, we are hearing about ‘Trust Bernie’ (Madoff? Sanders?), mortgage meltdowns and ‘The One Percent,’ before finally arriving at a point where the ringmaster, Captain Greedy (played by Director Will McFadden), morphs into General Greatmaker (obviously Trump) who, along with his heavily accented wife, continue to take advantage of the dupes (an “audience” of mom, dad, son and girlfriend), carnival spectators who have been manipulated from the start. Of course, by making this family seem to be part of the true audience, the implication is that we, the theater audience, are the true dupes of the scheming machinations of the financiers. But the family members are such naïve hicks that it seems a stretch to presume they are US.

It is a tough trick to pull off to make an audience care about or relate to any of the characters when they are all so obviously odious. And since this is a sideshow, the characters are naturally cartoonish to boot. Captain Greedy comes off as a sly and oily emcee — think of Snidely Whiplash in a waistcoat. A great asset to the production is Bob Turton as the clown/fakir. His zany antics are fun to watch, and he has a goofy charisma that makes all take notice. Mary Eileen O’Donnell plays a few choice roles — the fat lady (Madame Mammon), the fortune teller (Madame Roubini) and the drunken Lord Chief Justice Insobriety. Of course, in the cartoons, villains like these always get their comeuppance. But here, they never do.

With 24 songs, Captain Greedy certainly has drawn up a wide range of boogeymen to lash out at — grasping governments, kleptocratic companies and crass consumers are all mercilessly mocked for their greedy ways. Some are inexplicable. For example, why is there a song called Keep Calm and Carry On, which mocks the British for their tendency to forbear? And while the Trumpian imposter General Greatmaker is declaiming, the song Hooverville kicks in to take us back to the Great Depression where we see shantytowns that sprung up…in 1933. Why?

Interestingly, though, no hint of any alternative is offered. Does the playwright imply moving toward a society where income is more evenly distributed and jobs and pay and industries change very slowly, if at all (i.e., a society with little downside, but very little upside)? Or is it OK to live in a dynamic, chaotic, unpredictable society where rewards are unevenly distributed, as long as you are personally virtuous? There must be a happy medium, and I don’t claim to know where that is. But as levels of wealth and technological change continue to accelerate, it’s good to keep asking the questions, as Captain Greedy’s Carnival so assiduously does.

Overall, Captain Greedy’s Carnival is a wacky joyride of a musical, visually arresting and conceptually astute. I just wish it didn’t feel at times as if we might be inside a Soviet re-education center in 1938, being shown exaggerated clips of the unrelenting evils of Capitalism, to stamp out any doubts we may have had about how great life is among the kulaks.