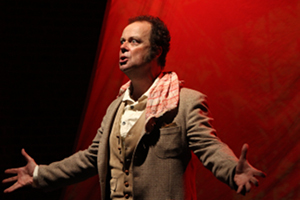 For all you armchair adventurers out there, here’s a tip: sharpen your machete and hack a path down to the Ivy Substation in Culver City. There, the Actors’ Gang is mounting an extraordinary version of Joseph Conrad’s classic novel Heart of Darkness. Brian T. Finney has adapted the book and performs it as a one-man show (directed by Keythe Farley), inviting theatergoers to accompany him to London, Brussels and, ultimately, the inner reaches of the uncharted Congo. So riveting and immersive is the harrowing journey that, by the end, you may find yourself mopping your brow and swatting imaginary tsetse flies from your forearm.

Finney is good at creating atmosphere. His character is Charlie Marlow, an 1890s riverboat captain who seeks fortune in the heart of Africa. In reminiscence, Marlow tells us the story of how he got to the Congo and what happened to him when he went upriver. While he begins the narrative in measured tones, tensions and passion build as he advances inland.

Finney is gripping as he is seized by paroxysms of near madness during his fateful encounter with Kurtz, the predatory ivory trader who is philosopher, prophet and lunatic all rolled into one. While few are likely to forget Marlon Brando murmuring “…the horror” during his turn as Colonel Kurtz in Apocalypse Now, Finney is equally memorable when momentarily inhabiting his own spooky persona of Kurtz, but adding different shades of meaning compared to the Coppola film.

Effective sound and visuals contribute to the humid and mysterious atmosphere on this journey. Three solitary masts with sails form the set, along with a battered table and chair and a steamer trunk, but these are used inventively, representing different objects at different times, with a pair of costumed helpers moving them in and out of position as needed. The sails form screens for various projections: old maps of Africa, grainy sepia photos and illustrations, clips of flowing water and, ultimately, leaping flames during the climax. Meanwhile, a soundtrack of rhythmic drumming, flowing water and twittering jungle sounds plays in the background, adding to the sense of foreignness and foreboding.

Conrad packed Heart of Darkness with heaping helpings of metaphor, making the book a longtime favorite of English lit teachers everywhere. On the surface, it is about conquest and colonialism, dealing with Belgium’s exploitation of its former colony’s vast resources. It also contrasts the ideas of darkness and lightness; this can refer to many things, from skin color and primitive versus modern societies, to the way we rationalize/whitewash the deeds that emanate from the darkest places of the soul. Finney has wisely avoided making the play into a polemic against Western greed and environmental destruction, instead focusing on the possibilities of how we can respond when confronted with abject horror.

I most appreciated the psychological aspects of the work. Conrad published Heart of Darkness in 1899, a time when intellectual interest in the mysterious realm of the subconscious was percolating throughout fin de siècle Europe. Sigmund Freud published his seminal work Studies on Hysteria in 1895, and it is through this lens that we can see how Conrad was, in his own way, exploring the darkest recesses of the mind. It occurred to me as I watched that Bram Stoker’s Dracula (published two years earlier in 1897) was covering similar psychological ground as presented in the journal of Jonathan Harker, who describes the horrors that follow meeting a charismatic yet gruesome character, very similar to how Marlow experiences Kurtz.

Whatever tributary of meaning you choose to embark upon, this performance of Heart of Darkness takes you to places remote and exciting and a little dangerous. What more could you ask for from an evening at the theater?