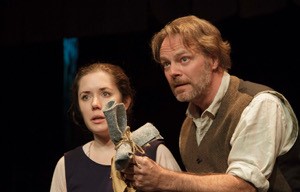 Alexandra Goodman and Bo Foxworth in “The Crucible” / Photo by FacetPhotography.com

Theatergoers familiar with Antaeus in North Hollywood know that the renowned classical theater ensemble double casts its productions — as a way for the actors both to learn from each other and to better make a living by being available for work in TV and film. But this may be the first time that Antaeus has decided to install dual directors of a production. Amin Shimerman asked fellow Antaean Geoffrey Wade to step in and take his place directing final rehearsals for a dramatic reading of The Crucible last July when he had to attend a cross-country funeral. When he returned, he recalls being gob-smacked: “The reading was in a much better place than I had envisioned. He brought such wonderful characterizations and theatrics and an understanding of the play.”

Such mix-and-match proclivities seem entirely natural for the cast members who are used to sharing and collaborating with their counterparts on a given role. The way it works for this production is the two casts have been named the Putnams (the group I saw) and the Proctors. Each of these set groups performs on either Saturday or Sunday. On Thursdays and Fridays, cast members are drawn from both crews, so there is no telling who you might see in a given role. The potential novelty of the dynamics between characters is something that is as invigorating for the audience as it is for the actors.

The Crucible is a different sort of Arthur Miller play than his celebrated Death of a Salesman or All My Sons. It is ostensibly the story about the frenzy surrounding the Salem witch trials of 1692, but Miller stated very clearly that he meant the play to be a commentary on the anti-communist hysteria whipped up during the 1947-48 hearings conducted by the House Un-American Activities Committee as well as Senator Joseph McCarthy. While Miller did take a certain amount of literary license, the characters and events are from the historical record. The enormous amount of research Miller conducted while writing the play is evident; for example, to keep dialogue authentic, he studied the language in the King James Bible to convey similar syntax to the Puritans of early Massachusetts.

The Antaeus production has wisely chosen to do away with the pilgrim hats and big shoe buckles in favor of modern street clothes for the men and plain jumpers with long skirts for the women, which give them a cultish, vaguely Mennonite look. The set is a ramshackle-looking structure held up by poles, the clapboards on the three walls scrawled with relevant quotes and inscriptions, including the infamous “Thou shalt not suffer a witch to live” quote from Exodus.

The beginning of the play sets the proper mood with the cast in a circle surrounding a projected cross on the floor singing an old New England hymn. But as soon as the action begins, you have to adjust to a jarring use of a theatrical technique. The actors do not speak to each other, but directly to the audience. It is as if they are performing a monologue or speaking to a ghost in front of them, not acknowledging the other actors at all. The directors call it presentation style and they felt it could be a way to tell the story more clearly. My view is that while it does allow the audience to hear the sometimes-difficult Elizabethan speech patterns more clearly, and to get a head-on view of each actor’s face, it also has a diminishing effect on the physical interaction between the characters. It is not a wrong choice necessarily, but it does take you out of the action a bit because it is so unnatural. There are, however, certain times when the actors do see each other, such as when husband and wife Proctor see each other close to the end.

The actors are uniformly good, but special mention must be given to Bo Foxworth who plays the protagonist John Proctor. He reveals his character’s virtues and his flaws with great clarity and honesty, showing us both the strength and fragility of his humanity as he wrestles with the moral dilemmas facing him. His performance is masterful — and needs to be since he is at the center of the play. Also worthy of note is Ann Noble as a dignified Reverend Hale and Kimiko Gelman playing Proctor’s wife in a sober yet thoughtful rendition. Another important character is Governor Danforth, who is the prosecutor. He is not played as an evil man, but as a man who is trying to be fair, albeit with twisted logic. To him, it would not be fair to the others who have already hanged for their sins to exculpate the others waiting to hang, even if they are innocent. It is worth noting that in the other cast, the Governor is played by a woman, while the Reverend is played by a man — yet another way for Antaeus to expand the relevancy beyond time and gender.

The language of The Crucible is rich enough to open a Swiss bank account with and the play moves along briskly through its four acts over two and a half hours (one intermission).  There are laughs: “The pure at heart need no lawyers,” and there is drama aplenty — the end of Act III is a real scare-’em-up with a cacophony of yelling and screaming. In the end, you do come to realize the relative ease with which mass hysteria can arise, and that it transcends time and it didn’t end with the McCarthy era. We have companies like Antaeus to thank for reminding us of this.