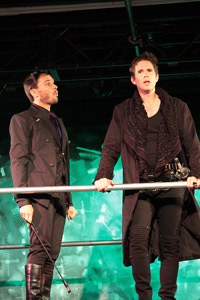 Pierre Corneille’s comedy The Liar (Le Menteur) was first staged in 1643, the same year that the 4-year-old Louis XIV ascended the throne of France to begin his storied 72-year reign. So yes, the play is old — antique really — and you could be forgiven for wondering if this is going to be some stilted, musty, dawn-of-the-Enlightenment morality play. Then you learn that the entire play is done in verse — iambic pentameter to be exact. Uh-oh… kiss of death; precious, hard to follow, twee. Ah, but not to worry, put all those preconceptions aside. Antaeus has unleashed a new adaptation that masterfully blends whiffs of the classic French comedy of manners with slapstick physical comedy and enough up-to-the minute tropes to forge a thoroughly modern Liar that is as lively and fun as any theater you will see this season.

Thanks must be given first to playwright David Ives, who made a “translaptation” (as he puts it) of The Liar for Washington, D.C.’s Shakespeare Theater Company in 2010. In a nod to Postmodern sensibilities, Ives mixed high and low, formal and vernacular, past and present in a way that surprises and delights. Terms like Chanel and iPhone run shoulder to shoulder with references straight out of the Ancien Régime of 17th-century Paris.

In many ways, The Liar can be seen as a French version of Shakespeare comedies such as Much Ado About Nothing and Twelfth Night. In fact, Ives makes this connection explicit by having characters mouth numerous phrases from several Shakespeare plays, some of which are word for word. Also like Shakespeare, Ives sometimes invents his own words like “buzzette” when it works for a rhyme. While Corneille’s verse was in 12-syllable Alexandrines — a form that works particularly well in French — Ives chose the 10-syllable iambic pentameter as a form that retained the all-important rhyming verse delivery, yet was more rhythmically apt for English.

Director Casey Stangl has taken Ives’ translaptation, assembled two alternating casts from among the talented Antaeus regulars, and hit just the right notes with the costume and set design. All the characters dress in black, with each individual defined by a specific style. This ranges from bustly gowns for the ladies to buccaneer and even punky leather getups for the men.

In keeping with the rigid conventions of French 17th-century theater (unity of time and place), all action takes place in a single day within a few hundred yards. The stage set, consisting of stacked arches, a staircase and a balcony stands in for exterior scenes set in the Tuileries Garden and the Place Royale (now Place des Vosges) and interior scenes within aristocratic townhouses.

The basic story involves a rascally charmer (Dorante, the liar) just arrived from the provinces to woo the ladies of Paris. He gets the name wrong of the lady he likes, Clarice, who is engaged to his friend Alcippe, and manages to dig himself deeper and deeper into a web of lies and mistaken identity that gets everyone in an uproar until, in the end, he realizes he loves Clarice’s friend Lucrèce and everything gets sorted out.

I saw Antaeus’ so-called Cherries cast which included Graham Hamilton as Dorante, Jules Wilcox as Clarice, Bo Foxworth as Alcippe and Joanna Strapp as Lucrèce. While the entire cast deserves applause, I was most impressed by the alpha-male swagger of Hamilton’s Dorante and by the manic physical manifestations of Foxworth’s Alcippe. Their duel/swordfight is a highlight of the play. Foxworth was the star of Antaeus’ production last season of The Crucible, an intense and dramatic role. Here, he shows off his great acting range with a hilarious, over-the-top rendition of a wild-eyed punk rocker lothario who knows he is being cuckolded, but is powerless to stop it from happening.

In the end, it is the clever, vibrant verses and our recognition of the perennial, all-too-human foibles of the characters that give this production its high-octane combustion.

“[The Liar] expends his magic, his dark artistry,

To dazzle us, reweave the tapestry

With brilliant colors from his endless spools.

He does what Nature does with Nature’s tools”

In the same way that Corneille was instrumental in shaping the French Classical Theater, Ives and his interpreters are forging a new path for today’s theater that demonstrates how old, boring stuff can remain relevant for modern, young audiences.

Photo credit: Graham Hamilton as Dorante and Joe Delafield as Alcippe   in Antaeus’ “The Liar” / Photo by Geoffrey Wade