Review: ‘The Barber of Seville’ (a POP opera) 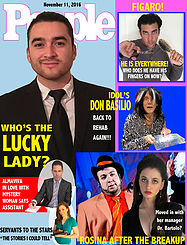 By now, regular Culture Spot readers should know that Pacific Opera Project offers the best value in opera in town. For $65, you get two tickets, a table for two, a platter of snacks and a bottle of wine. While POP does do opera seria, they are best known for their irreverent and inventive comic productions. Their latest, Rossini’s The Barber of Seville, falls under the latter category, and it is an unqualified success, using a contemporary Hollywood setting to evoke consistent hails of laughter. The show continues through Nov. 19 at the Ebell Club of Highland Park.

As Rossini’s famous overture opens the opera, a slideshow commences, giving some backstory about the characters. Like pages ripped from a lurid tabloid, we see a series of images outlining the crazy life of Rosina, a pop singer (played/sung by Meagan Martin). Through clever use of Photoshop, we see her and the men who flit about her at the Grammys, on the cover of People magazine, on the Red Carpet, in embarrassing paparazzi shots, often with her head grafted onto the bodies of real celebrities.

In this feverish spoof of La La Land’s entertainment industry, Director Josh Shaw has cleverly adapted the characters to fit the setting that will be oh-so-familiar to most viewers. Dr. Bartolo (E. Scott Levin) is Rosina’s bloated, vulgar manager/producer who keeps her on a short leash, especially since she has just returned from rehab. His friend Don Basilio (Phil Meyer) channels Steven Tyler as an aging, coke-addled musician who is also a judge on American Idol. The two other main characters are Lindoro/Count Almaviva (Sergio Gonzalez), Rosina’s love interest, and Figaro (Bernardo Bermudez) who is the consummate Hollywood stylist, busybody and gossip.

Shaw has opted for limited musical accompaniment in this production: one piano, but with four hands playing. Musical Director Stephen Karr is joined by Zach Neufeld to play the score adapted by Arnold Schoenberg. It sounds complex, dynamic and wonderful, and no one should miss having an orchestra. Being that the piano is right down on the floor to one side of the stage, the balance of voices to music can sometimes be problematic. The closer one sits to the piano, the more likely it is that the voices onstage become at times overshadowed, making them occasionally difficult to hear clearly, even in a small space like the Highland Park Ebell Club.

I give nearly all the singers high marks for their expressive and lovely vocal tonalities, even if their absolute power may not be up to the level of the best that you might see at LA Opera. For a very small-framed woman, Martin projects very well, and her beauty and vivaciousness keep one’s attention riveted. While Gonzalez’s mellifluous voice is lyrically pleasing, it is Bermudez’s Figaro that is the most fun to watch. He is flamboyant without coming off as a queen, humorous without being over-the-top campy. Baritones Meyer and Levin are both hilarious playing the worst kind of Hollywood stereotypes.

There are other touches that put a fresh spin on the intrinsic humor of the original texts. Characters are constantly on their mobile phones, and we can see the amusing messages from their phone screens projected up with the supertitles. What perhaps would have been snuff in a period production is now cocaine, the ubiquity of which provides a source for many jokes. The costuming by Maggie Green is goosed to just one level above realistic, making the characters close enough to real to accentuate the comic potential. While the first act set seems a bit barren, the subsequent rejiggering to Rosina’s room with its blue tiger-print wallpaper and turquoise naugahyde™ sofa is deliciously outré.

The Barber of Seville is POP at its best…funny, accessible, affordable and casual. The crowd is younger and more diverse than you would normally find on Grand Avenue at the Dorothy Chandler, and that’s a good thing. It proves that opera is a living art form, one that still has the ability to appeal to a wide audience if handled with imagination and humor. Grab a non-opera-going friend and do them a favor by taking them out to Highland Park for a very entertaining evening.