Review: ‘The Curse of Oedipus’ at Antaeus Theater 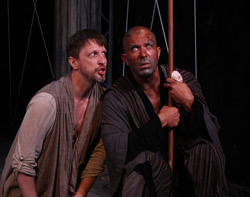 With episodes of patricide, fratricide and suicide, it seems as if every side of “The Curse of Oedipus” is going to be sensational and gruesome. But don’t mind the mayhem — the expert retelling of this ancient Greek myth assures a rich and entertaining night at the theater. Writer Kenneth Cavander and Director Casey Stangl have distilled the drama from several ancient sources and given us an all-new version of the classic tragedy that is worthy of the word.

This dense and multilayered play began as a two-part retelling of the Oedipus myth at the Williamstown Theater Festival in 1988. In a vivid example of how lasting works of art evolve, the director convinced the playwright to condense Oedipus into one evening. This latest version has been under development for three years and, according to the director, is still evolving.

For this production, the intimate space at Antaeus is filled with a jumble of columns — both crumbling and intact — set around a circular motif on the floor. Numerous lengths of white rope slant from floor to ceiling, suggesting both a connection between heaven and earth and the tangled web of fate. The ancient and mysterious atmosphere is further enhanced by periodic releases of stage fog, as well as a live drummer/percussionist who sits by the side of the stage, creating a percussive soundscape that punctuates the unfolding action. The costuming is mostly ancient in feel as well, with togas, chitons and sandals striking a correct period pose.

The story follows the basic elements of the Oedipus story in a linear fashion: In the city of Thebes, an outsider arrives who solves the riddle of the sphinx, becoming king as a result. He then marries the widow of the former king who was killed by a stranger on the road. Later, Oedipus discovers to his horror that he is actually the son of the dead king (whom he killed in a random encounter) and has married his own mother, all while believing himself unrelated to them. Once the backstory is out of the way, the real drama — the curse — begins: Oedipus blinds himself with knitting needles, his wife/mother commits suicide, and his sons declare war on each other.

Whether intended or not, the most powerful dramatic performances come from the men, particularly Oedipus and Creon, the regent. Terrell Tifford creates an intense and compelling Oedipus; we can feel not only his physical pain when he blinds himself, but his raw emotional pain as well. Tony Amendola is commanding and kingly as Creon, and he also shows us his bewilderment as events spiral beyond his control and comprehension. (As usual, Antaeus uses double casting for its productions, so attendees may see different actors.)

Cavander has left many of the conventions of ancient Greek dramas intact while updating them for modern audiences, not always successfully. There is the traditional Chorus, in this case the citizens of Thebes, who comment on the action. But their chanting over drumming reminded me more of the groovy cultists in the 1973 film “The Wicker Man” than ancient Greeks. We also have periodic appearances by the gods Dionysius (Barry Creyton) and Apollo (Stoney Westmoreland), who also comment on the action. The wisecracking lush Dionysius and dry, academic-sounding Apollo offer a bit of Abbott and Costello dynamic and bring some comic relief to the seriousness, but while they provide a couple of laughs, the characterizations seem out of place.

The second half of this lengthy play involves the aftermath — years later — of Oedipus’ revelations, especially the tension between Oedipus’ sons and the fate of his daughters Antigone and Ismene. And no lack of action: There is a sword fight, an earthquake and a scene where Creon goes mad. Tifford’s physical transformation from a young hero to an old man is extraordinary.

“The Curse of Oedipus” is a complex work, and the playwright demonstrates his sure grasp of the deeper meanings of this myth. Toward the end, Dionysius and Apollo agree to become mortal, foretelling the eventual collapse of the pantheon of ancient gods, proclaiming (with a nod to Protagoras) that, “Man is the measure of all things.” This ‘Twilight of the Gods” theme is an idea explored by many, particularly Wagner in his Ring cycle, and in Norse mythology. Conceptually, such material can be a bit thick going in parts, but in this case the strong acting and propulsive writing are delightful handmaidens to the intellectual rewards earned.