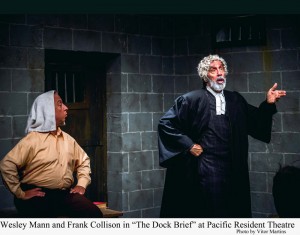 “Comedy is, to my mind, the only thing worth writing in this despairing age, providing it is comedy which is truly on the side of the lonely, the neglected and the unsuccessful.” So says Sir John Mortimer, the British-born playwright and author of The Dock Brief. While this modest comedy has only two characters — a British barrister and his client on trial for murder — all three of those traits are on display in each of them. The crucial difference is that only one of the men acknowledges his limitations. And therein forms the seed of the comic dissonance that lies at the heart of this play.

While Mortimer’s name might not immediately ring a bell for American audiences, fans of early British television will know him as the creator of Rumpole of the Bailey, a series of plays based on his barrister father. Mortimer (who died in 2009 and is incidentally the father of actress Emily Mortimer) wanted to become a playwright straight out of college, but was persuaded to enter the law by his father who advised him as follows: “My dear boy, have some consideration for your unfortunate wife… [the law] gets you out of the house.” Mortimer became best known for defending clients in obscenity cases — notably the successful defense of Virgin Records for allowing the word “bollocks” in the Sex Pistols seminal album Never Mind the Bollocks, Here’s the Sex Pistols.

But Mortimer somehow managed to find the time to write throughout his lengthy legal career — radio and television series, novels, films and plays. The Dock Brief has a slight premise: a seasoned barrister flaunts his pretensions as an expert lawyer only to be later revealed as a hack and a man living in self-denial. While it may not seem like the most fertile ground for comedy, it is the two actors that pull it off and actually make it funny.

The barrister (Morgenhall) is played by Frank Collison, who happens to be a founding member of the Pacific Resident Theatre, but who has been away from the stage for seven years doing film, TV and voiceover work. His stentorian voice and towering stature is perfect for the preening self-important barrister. On the other side is his client Fowle, played by TV and film actor Wesley Mann. Fowle has killed his wife, seemingly only because she was annoying, and freely admits it. Mann’s roly-poly physique and perpetual hangdog expression tell us one thing without the need for any words: this man was a seriously henpecked husband.

The action is a bit slow in the first half as we get to know the characters. The dialog is full of unfamiliar British terms, many of them legalese, but the playbill thankfully has a glossary for the uninitiated like myself. While there is no intermission, there is a brief pause when the lights go down to indicate the occurrence of Fowle’s trial. The denouement, after the trial when both have returned to Fowle’s cell, has the best humor. Morgenhall is found to be the talentless duffer we suspected him to be, while an ironic twist occurs that redounds to Fowle’s benefit, leaving him ultimately better off than his bumbling barrister. In the end we see that both men are hapless characters who deserve our empathy.

The Dock Brief is the fourth and final show of the 19th season of the Pacific Resident Theatre. Located close to the beach in Venice, the PRT has a long history of providing satisfying theater to Westsiders. Even if you live farther afield, this may just be the perfect excuse to splash around in some of that El Niño-warmed surf, have an early shore dinner and afterwards catch a few laughs at The Dock Brief.