Review: ‘The End of It’ at the Matrix Theatre 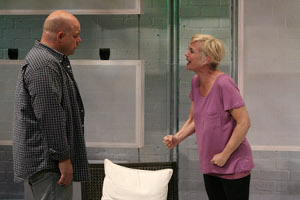 Paul Coates’ “The End of It” receives a first-class, heart-stopping world premiere at the Matrix Theatre with a tour-de-force performance from Kelly Coffield Park as a contented wife who has just been told by her husband he wants a divorce. Her big scene in which she’s begging, BEGGING for her husband’s change of heart is wrenchingly raw and utterly terrifying. Brava! The fact that Park doesn’t overpower the others in the ensemble speaks volumes about the talents of the other five actors.

“The End of It” relates the intertwined stories of three couples during a less-than-12-hour period in which one partner tells his/her respective spouse, “I want a divorce.” The basic story’s the same, only the genders of the relationships are different: a man and woman (Coates and Park), a gay couple essayed by William Franklin Barker and David Youse, and a lesbian couple portrayed by Ferrell Marshall and Wendy Radford. Youse fully grabs his role by the throat as the being-jilted gay spouse with such empathetic intensity, even your resulting laughter has to compete with your flowing tears.

Nick DeCruccio nimbly directs with precision timing and intersecting of couples. One couple’s scene overlaps another couple’s until, by the show’s end, all three couples share the same set (a very clean-lined and stylishly simplistic living room by Francois-Pierre Couture. Kudos to Couture!)

Coates’ most naturalistic and realistic dialogue easily shows the intimacy that required years of couple-dom to develop: the finishing of each other’s sentences, the dependence on each other for misplaced items, the couple’s voices frequently misidentified on the phone.

Props to whomever picked the songs to bookend the two acts: “Moon River” by Louis Armstrong and Adele’s “Turning Tables” in the first act, and “We Found Love in a Hopeless Place” and “Both Sides Now” in the second.

I wouldn’t wish the heartbreak and anguish of this breaking-up experience on anyone — in real life. But experiencing this hour-and-a-half play might teach us to think through our actions before afflicting such pain on our supposed loved ones.

A must-see piece of LA theater! Well done, all!