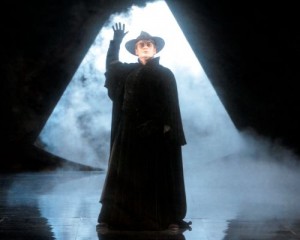 Tomas Tomasson in the title role of “The Flying Dutchman” at LA Opera. / Photo by Robert Millard

Hollywood has nothing on LA Opera’s enthralling production of “The Flying Dutchman” (Der fliegende Holländer). A vampiric ship’s captain and ghoulish choruses of sailors and young women entrance us with Richard Wagner’s 19th-century ghost/love story — an old legend in tune with popular culture’s fascination with vampires and the undead. Wagner’s grand, evocative music and this gorgeous, inventive production from the Lyric Opera of Chicago staged by Nikolaus Lehnhoff combine to blockbuster effect. Yet despite its cinematic grandeur, the opera is shorter than most of this year’s Oscar-nominated films, clocking in at a mere two hours and 20 minutes without intermission (as Wagner intended it to be performed).

The unnamed Dutchman is a ghost cursed by the devil to wander the seas eternally, unless he can find salvation from a woman’s faithful love — a quest only possible every seven years when his ghostly ship, The Flying Dutchman, is allowed to reach shore. LA Opera’s “The Flying Dutchman’s” shore leave is equally ephemeral; it has cast anchor at the Dorothy Chandler Pavilion for only five more performances through March 30. I can’t resist the urge to insist: Don’t miss the boat!

Typically Wagnerian, the music is dramatic, with soaring, sweeping, tempestuous sounds that evoke storms both natural and metaphorical. Kudos to James Conlon, who got a workout conducting this one. His hair could be seen flying wildly as he conducted the orchestra (complete with wind machine and harp) in an energetic performance so deserving of praise that he brought the musicians onstage at curtain call.

In thinking about the design, I’m reminded of a line in Coppola’s “Dracula” about crossing “oceans of time”; it seems to straddle Gothic/Romanticism and futurism. The somewhat stylized movement and white makeup of the singers add a ghoulish effect to the imaginative sets and costumes, where steampunk meets Tim Burton. One of the best examples is the costumes on the spinning women in the second act, whose wide silver hoop skirts have metal rings around them that, accentuated by gorgeous lighting by Duane Schuler, glow bright silver at first and turn golden later on.

The story unfolds in the cavernous belly of an enormous ship represented by metal girders on each side of the stage. The entrance of the Dutchman is nothing less than cinematic. Introduced with theatrical music, he appears as a shadow cloaked in black with his signature hat, outlined against an oceanic blue background, visible between the blades of a rotating ship’s propeller at the back of the stage. The floor before him is so glossy it looks wet with saltwater.

Cursed by the devil for insisting that he would not turn back for all eternity while trying to round the Cape of Good Hope during a violent storm, the Dutchman is not an evil spirit, but a lost soul. He is more Hamlet than Dracula, philosophical rather than seductive, desiring nothing more than an end to his suffering. With white makeup and a long, dark ponytail, Tomas Tomasson, an Icelandic baritone making his LA Opera debut, looks the part and sings passionately and naturally, earning enthusiastic cheers from the audience at curtain call.

The ship onstage is not his own, but that of Daland, a Norwegian captain who has been forced by a storm to take shelter seven miles from his home port. James Creswell, with a futuristic silver costume, tall wig and sunglasses (again, reminiscent of Gary Oldman’s Dracula), draws laughter for his lightning-fast promise of his daughter Senta’s hand in marriage to the Dutchman in exchange for treasure. But like all the cast, he doesn’t go over the top.

Coincidentally, Senta has fallen in love with the Dutchman. Having heard the legend of his doomed existence, she is mesmerized by a picture hanging in her house, envisioned in this production as a black outline on a transparent scrim at the front of the stage. Julie Makerov portrayed an understated, delicate Senta on opening night, and received a standing ovation for stepping in (without a single walk-through on the Dorothy Chandler stage) after Elisabete Matos had to bow out only 12 minutes before the show’s scheduled start due to chest congestion from a cold. With her natural makeup, hair and dress, Makerov’s character feels as much an outsider as the Dutchman, and it is fitting that she is the one to sacrifice herself to save him.

While “The Flying Dutchman,” which premiered in 1843, is an entertaining ghost story, it can also be seen as much more. Wagner composed the music and libretto for a piece of art on a par with literary ghost stories like “Hamlet” and “The Turn of the Screw” — both of which have lent themselves to operas. As Thomas May points out in an essay in the program: “He draws us in with a thrilling ghost story that actually embeds a meditation on something far more profound.”

Wagner wrote in his memoirs that the Dutchman’s yearning for release from his eternal wandering expresses a universal “longing for peace from the storms of life.” Find your own respite for a couple hours at LA Opera.