Review: ‘The Gershwins & Me’ From Michael Feinstein and the Pasadena POPS 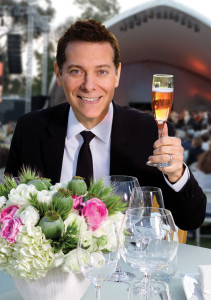 Conductor Michael Feinstein and the Pasadena POPS shared an amazing cache of rarely heard Gershwin treasures with a capacity crowd of 4,000 enthusiastic fans of “The Gershwins and Me” on Sept. 7 at the Los Angeles County Arboretum. The program was brilliant, the music was authentic and the artistry superb. Grammy Award-winning singer Catherine Russell and stage and television star Tom Wopat were spectacular in their solo roles supporting Feinstein as he shared his personal and joyful insight into the genius of the Gershwins.

Adding to the festive mood was an impromptu celebration of Feinstein’s birthday with obligatory verse led by the JPL Chorus from an enthusiastic crowd that included members of the Gershwin and Mancini families, Debby Boone and Betty White.

Feinstein is a gifted communicator. His anecdotal commentary on the music, the times, the arrangers and the Gershwins was a wonderful complement to the program, which was itself a rare musicological compilation. Feinstein, who has an honorary doctorate from California State University, Los Angeles, grew from his experiences as archivist and personal assistant to Ira Gershwin into a leading scholar and champion of American popular song music.

The POPS orchestra proved to be a versatile ensemble, smoothly moving from combo to big band to full orchestra. The core rhythm section was schooled in jazz and swing, and could even create a café-style intimacy. The small ensemble work was first-rate. The selections were taken fully from the work of George and Ira Gershwin, but presented through the unique contributions of historic Broadway and Hollywood collaborators, particularly iconic arranger Nelson Riddle, but also Conrad Salinger, Robert Franklyn, Don Rose, George Bassman, Hershey Kay, John Oddo, Tedd Firth, Alan Broadbent and Joseph Lilley.

The opening program was devoted to instrumental arrangements, and true to Feinstein’s style, the selections were rare and really quite delectable. Heindorf’s overture to the 1946 George Gershwin film biography “Rhapsody in Blue” opened the show. The arrangement earned an Academy Award nomination for Warner Bros., and has not been performed publicly since the film’s production.

One of my favorites of the night was Riddle’s orchestration of the Second Piano Prelude. For this version, the soulful blue melody was scored for oboe solo over the lush strings led by Concertmaster Aimee Creston. The effect was transcendent, one of the more delicate affective moments of the night.

Catherine Russell was stellar as she sang Riddle arrangements written for Ella Fitzgerald, “Nice Work If You Can Get It” and “The Man I Love.” Her singing of “Love Walked In” was wonderful.  She has a unique talent.

Arrangements by Don Rose ended both halves of the program, the first with another unheard overture from “Of Thee I Sing,” and “Shall We Dance” ended the second half. The post-intermission fare started with more premieres of recovered archival gems like the original 1940 film score overture to “Strike Up the Band” arranged by George Bassman and a “Porgy and Bess Suite” arranged by Hershey Kay.

The JPL Chorus sang a homespun version of “I Got Rhythm.” The singers are employees of the Jet Propulsion Laboratory who have been collaborating with the Pasadena Symphony Association for their choral training. The Chorus brought a nice nuance to the quality of the event and brought to mind the significance of community engagement in the arts. Bravo for that!

Tom Wopat’s mellifluous baritone voice matched well the selections. His coolness stepped up with “That Certain Feeling,” accompanied by the fabulous vocal group “Down 4 the Count.”  I heard the styling of Mel Tormé at times. Wopat was at his best with Riddle’s “I Got Plenty O’ Nuttin’” arrangement written for Frank Sinatra.  His voice got stronger with each rising verse.

Before closing, Feinstein treated the audience to an unscripted preview of the upcoming season as he accompanied himself on piano and sang a touching version of “They Can’t Take That Away From Me.” His voice is so expressive, his art is sincere.

The 1927 standard “S’wonderful” brought Russell and Wopat back on stage and made a spectacular encore for the show and for the Pasadena POPS season.

Feinstein was a phenomenal choice for music director, and the Pasadena POPS has a record-breaking season to celebrate. Bravo!