Review: “The Gift” at the Geffen Playhouse 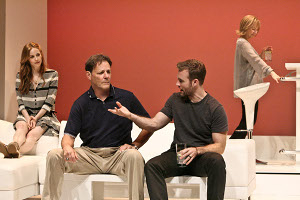 The American premiere of Joanna Murray-Smith’s “The Gift” at the Geffen Playhouse may not be the present that you want to give everyone.  Chock full of witty one-liners and limned by a talented cast of four, the main premise might be too much to accept.

Two couples meet at a luxury resort in the tropics. Well-to-do Sadie and Ed are there to celebrate their 25th wedding anniversary and to re-kindle their lost passions, love, interests… well, everything.  They meet young artist Martin who is still in love and lust with his beautiful wife Chloe. Over many, many drinks, they bond with a pact of only telling the truth when the four of them get together. After Martin saves Ed from drowning, Martin insists on gifting Ed with a token of his appreciation. When Martin and Chloe refuse any gifts, they all agree to meet again on the one-year anniversary of their meeting.  At that time, Ed and Sadie will give Martin and Chloe anything they desire.

Scenic designer Derek McLane creates the eye-catching, wide-open set with stark-white furniture that, in a winning collaboration with media designer Howard Werner, achieves two distinctly dissimilar locales — Sadie and Ed’s hilltop home with a panoramic view of Los Angeles and the tropical resort — all with the simple switch of the video backdrop. The most amazingly stunning effect evolves from the combination of Peter Kaczorowski’s lighting effects with John Gromada’s ocean sounds to create the climactic storm/overboard scene.

Maria Aitken directs her ensemble at a quick pace in this intermission-less 90-minute show, but with abruptly awkward scene endings and the usually reliable Baker needlessly screaming her lines.

Will you, the audience, be as appalled as Ed was at what Martin and Chloe chose for their gift? Or will you go along with the far-fetched premise that Sadie reasons is perfectly logical?