Review: ‘The Goat, or Who Is Sylvia?’ 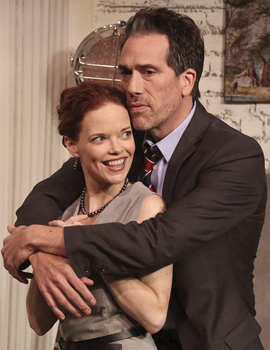 Ann Noble and Paul Witten in “The Goat, or Who Is Sylvia?” Photo by Michael Lamont

Edward Albee’s “The Goat, or Who Is Sylvia?” receives a stunning mounting at the L.A. LGBT Center. Ken Sawyer directs his talented cast with precision at a breakneck pace for a very sleek, efficient 90 minutes. Albee, renowned for his deep dramas of troubled real people, actually allows some very funny exchanges in this extremely volatile, deservedly multi-award-winning play.

Martin (Paul Witten) and Stevie (Ann Noble) seem to be living a charmed life. Successful, smart, literate, witty and loving parents to their teenager Billy (Spencer Morrissey), they also still enjoy a satisfying sex life. “Goat” opens with Martin getting ready for a video interview with his childhood friend Ross (Matt Kirkwood). The subject of the interview focuses on Martin turning 50 and being honored for his latest architectural achievement. Totally distracted, Martin, after much plodding from Ross, admits to having fallen in love with Sylvia. Turns out Sylvia is not the “other woman,” but a goat.

The absurdity of this situation gets deftly balanced by Witten’s sincerity and incredible acting skills, inviting the audience to see the genuine feelings he has for Sylvia. Not to defend his actions, but Witten makes more of a plausible case for Martin’s unusual attraction. Martin even joins a support group of animal lovers to find answers to his current state of mind. He’s been seeing Sylvia for six months and experiences such joy with her. Martin is amazed that all of the other members speak so miserably about their animal of preference.

Witten makes his conflicted Martin work. You may not agree with his choice of an extra-curricular four-legged partner, but you can see Martin does really love his wife and son. Martin and Stevie’s pre-revelation banter is so comfortable, so top-each-other’s-line sharp.

Noble carries the bulk of this Albee masterpiece on her shoulders. Her range of emotions and reactions to Martin’s revelation of his relationship with Sylvia run the gamut from frenzied mad to hysterically funny to tragically angry. In less-talented hands, this Stevie would be so over the top. Noble makes all her raw histrionics so heartfelt, so painfully retching, so real. Brava, Ann Noble!

Morrissey gets his moment to shine in his climactic confrontation scene with Martin. Hurt by his father’s affair, Billy is also struggling with being out at school. Morrissey exhibits youthful insecurities amidst the adult realizations and appreciation of the good family life his parents give him.

Martin and Ross have been best friends through marriages and kids since they were both 10 years old. How interesting to note how differently these two have evolved over the years. Ross can easily overlook his buddy having an affair, but not with a goat. Ross also can’t accept Billy being gay — “He’s only going through a phase.”

Kudos to set designer Robert Selander for his inviting living room set chock full of luckily disposable items that get smashed by the marvelous Noble.

There are so many levels of acceptance or discomfort in Albee’s “Goat.” Brilliant food for thought.