Review: The Group Rep Presents ‘Bach at Leipzig’ at the Lonny Chapman Theatre 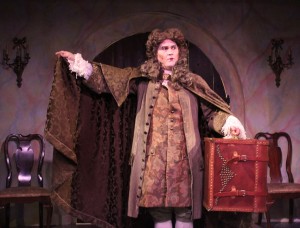 The Group Rep presents "Bach at Leipzig" at the Lonny Chapman Theatre through May 1. / Photo credit: Drina Durazo

Since I am too old to hunt for colored eggs, I figured the next best way to spend my Easter Sunday was to catch a performance of “Bach at Leipzig,” a resurrected historical farce written by Itamar Moses, presented by The Group Rep at the Lonny Chapman Theatre in North Hollywood through May 1. After all, it was Bach who wrote the glorious Easter Oratorio, a classic piece of Baroque choral work. While not up to that level of artistic splendiforousness, “Bach at Leipzig” is an intelligent and conceptually ingenious piece of theater with rewards for those who persevere.

The play takes place in 1722 at the Thomaskirche in Leipzig, Germany, and is loosely based on actual events. The organist of the church has suddenly died and the town council sends out a call for organists to fill the vacant chair. The characters in the play are the half-dozen organists from across Germany who show up to compete for the coveted position. It is the subsequent deviousness, rife with blackmail, bribery and betrayal, that provides the grist for the drama.

The play, at two and a half hours long, could benefit from some editing, and nearly all of it should be directed at the First Act. There is too much setup, with a laboriously slow introduction of the characters. It was difficult to care about where things were going with lackluster dialogue and little action. Thankfully, things improved substantially in Act Two.

The Second Act opens with one of the organists sitting in a prison (as a result of another organist’s lie). He then begins to explain the meaning of a fugue, a complex compositional technique that involves two or more contrapuntal lines, moving independently, yet following an identical theme. As he explains the definition, each of the other characters emerges from the wings in various combinations, silently moving from position to position as a six-voice fugue by J.S. Bach plays over the speakers. Each actor appears and disappears, circling, shifting, sometimes colliding, sometimes standing still, kinetically demonstrating the art of the fugue. It is a bravura set piece.

From this point on, we begin to understand the relationship between the characters as independent lines of a sort of dramatic fugue. They all play separate roles, but are inextricably linked together by fate and foible. Their personalities are easily distinguishable — the fool, the fop, the ne’er-do-well, among others — but they depend on each other to reach the conclusion.

With brainy meditations on musical theory, the artistic temperament and Enlightenment ideals, Moses has given us a costume drama that has the wit, subterfuge and betrayals that we expect, but with a deeper level of intellectual engagement. Director Calvin Remsberg’s experience with period plays and as a vocal coach enriches the performances of the actors, whose vocal lines are clearly delineated.

For a play called “Bach at Leipzig,” it seems slightly disappointing that we never get to meet the Meister (although there is a cameo by Bach’s close friend Telemann). Bach is the unseen latecomer who ultimately gets the plum job. But we do feel his presence: in the closing moments of the play, we see the dejected organist Schott (Larry Eisenberg) standing outside the doors of the Thomaskirche, brooding. But as the organ inside begins to exhale the first notes of a lovely fugue, we see his expression slowly change to surprise, then wonderment, then to beatific ecstasy as multiple musical lines interweave. It is a wonderful theatrical moment and a memorable end to a play that is as much tribute as tribunal.