Review: The Group Rep’s Revival of ‘Someone Who’ll Watch Over Me’ at the Lonny Chapman Theatre 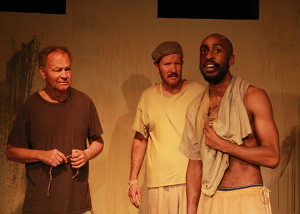 Considering the proliferation of hostage-taking all over the world, from opportunistic drug lords in Latin America to militant groups in the Middle East and Africa, it doesn’t take much to identify with the characters of “Someone Who’ll Watch Over Me.” The Group Rep’s revival of Frank McGuinness’ Tony-nominated play etches the lives of three men locked up indefinitely by Islamic militants in 1980s Beirut.

Chained in a cell together, an American doctor, an Irish journalist and an English professor have little in common but their fate as pawns in world politics. They also have no one but each other. So cut off are they from the world that day and night are indistinguishable. For these men, time moves slowly, tedium is a daily test, uncertainty is torture, and despair will kill.

Director Gregg T. Daniel’s staging never bores, which is a feat, considering the limits of three men chained in a single small room. He’s created some deeply felt dramatic moments. In the best of all worlds, equally skillful attention given to some of the quieter moments would heighten tension and add nuance.

McGuinness’ wonderful characters have as much to say about the differences between the men as the commonality of their plight. At the beginning of the play, Adam, the American doctor, is following an exercise routine, determined to stay fit in all ways as he defies his captors’ efforts to “break him.” Evan L. Smith imbues Adam with an underlying disbelief that grows more feverish as despair sets in. At one point he cries out, “I am an American,” a mantra that surely seals his fate.

Bert Emmett’s Irish journalist begins full of sauce, and it’s admirable to watch as Emmett drains him of it and refills him with a selfless love for his companions. Lloyd Pedersen never makes the English professor prissy or annoying even as he compulsively folds and refolds the same two articles of clothing.

The cramped cell in which the men are kept is vividly bleak and dirty, thanks to design by Gary Lee Reed and lighting by Kim Smith. Elizabeth Nankin’s costumes convincingly mark the passing of time and the deterioration of the men’s condition.

Sound design by Steve Shaw is excellent, although I question how some of it serves the play. At the beginning of the play and before the second act, the audience is treated to sounds supposedly from the streets of Beirut. In addition, sound is used to “set the mood” at various points. Both uses of sound are more cinematic than theatrical. The characters cannot hear the sounds of the street. If they could, they’d know when it’s day and when it’s night. Such use of sound tends to separate us from them rather than invite us into their world. And the theater audience, which is in the moment with the characters, doesn’t need to be prepped as to how to feel by a soundtrack.

All in all, this is an excellent and moving production filled with deep emotion, humanity and, thankfully, comedy. We’d all like to believe we’d fare as well as these men under similar circumstances.

The Group Rep’s revival of “Someone Who’ll Watch Over Me” continues through June 2 at the Lonny Chapman Theatre, 10900 Burbank Blvd., North Hollywood 91601. Show times are Friday and Saturday at 8 p.m., Sunday at 2 p.m. Talk-back after Sunday matinee on May 19. For tickets and information, call (818) 763-5990 or visit http://www.thegrouprep.com.