Review: ‘The Heart of Robin Hood’ at the Wallis 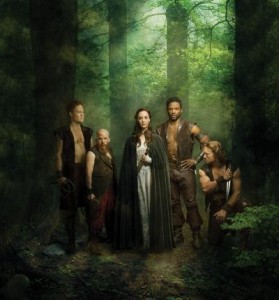 I’m always interested in the genesis of complex works: What was the spark? How did it develop? What collaborations were key to its success? The Heart of Robin Hood, now playing at the Wallis Annenberg Center for the Performing Arts, has particularly unusual DNA. It’s an English myth, re-envisioned by a British screenwriter, filtered through an Icelandic sensibility, all performed by American actors. The result is a family-friendly entertainment that includes music, comedy, acrobatics — even a sword fight — in a romp through Sherwood Forest.

David Farr, the playwright, is perhaps best known for penning the excellent miniseries The Night Manager, starring Hugh Laurie and Tom Hiddleston. He seems to have a knack for propulsive narrative with plenty of action, and that is certainly on display with The Heart of Robin Hood. The basic story does not deviate much from the traditional telling, although Robin (played by Luke Forbes) and his merry band, which includes Will Scarlett (Sam Meader), Much Miller (Kasey Mahaffey) and Little John (Jeremy Crawford), uncharacteristically neglect to give to the poor after they take from the rich (until Maid Marion’s virtuous influence, that is).

The element in this potpourri that strikes the most interesting note is the Icelandic overlay owing to Co-Directors Gisli Örn Gardarsson and Selma Björnsdóttir, as well as the singer and Musical Director Salka Sól, a pop star in Iceland. Obviously, Iceland has its own long relationship with myth and sagas of yore, and those who grew up with those traditions may just have an intrinsic advantage for presenting them to others in an engaging way. The play is an original production of the Icelandic company Vesturport, and it premiered in London in 2011. It has played around the country at various venues since.

Salka Sól seems to be a kind of Icelandic Taylor Swift: she is a singer, rapper, actress, radio host and TV personality, appearing as a host on The Voice-Iceland. She wrote all the music and lyrics for The Heart of Robin Hood. She is obviously an accomplished singer, and her strong, clear voice is always a pleasure to hear throughout the production. With long, blond pigtails under a feathered cap, dressed in medieval-ish costume, she looks pretty great as she periodically emerges from the wings with her four-piece band to provide musical interludes to the action. Some of her lyrics are in English and some in Icelandic (I presume). It has a nice folksy vibe that suits the English forest setting very nicely.

Most of the comic relief comes from one character, Pierre (Daniel Franzese), companion to Maid Marion (Christina Bennett Lind). Franzese’s hulking form contrasts with his effeminate, slightly bitchy character as he cracks jokes, appears in outlandish costumes and does a yeoman’s job keeping the overall tone light and frothy. The other bit of comic relief comes from Marion’s loutish younger sister Alice (Sarah Hunt), who is on a single-minded hunt to get her sister married off so she can then find a lad for herself.

The set itself also adds to the funhouse feel. It is a green forest with trees on each side. The main element is a wide, steep green-carpeted slide in the center that characters are constantly climbing up and careening down, adding a kinetic element to the unfolding drama. Set into the slide are a series of doorways, hinged at the bottom, which open at various times allowing characters to step out and declaim from the heights.

The principal theatric tropes that Farr utilizes — the damsel in distress, the girl disguised as a boy, innocent children at the mercy of an evil tyrant — are boringly standard, but this is not really a play that attempts to reveal anything new or requires thoughtfulness from its viewers. This is a production that relies most on buff guys bare-chested under leather vests, beautiful women in tight bustiers, rope swinging, sword clashing, bluster and bravado. In short, it is largely designed as a family entertainment, meaning children will like it: there were a lot of them in the audience.

The Heart of Robin Hood does not really operate on multiple levels for adults and children the way the best Disney productions do. But on a raw, Errol Flynn, swinging-from-branch-with-knife-in-teeth level, it succeeds very well. At the end, I asked the 10-year-old boy sitting next to me how he liked it. “It’s pretty good,” was his terse response. “Yes,” I replied. “I think you nailed it.”

Catch the final weekend of The Heart of Robin Hood at the Wallis: