Review: ‘The House of Yes’ at the Zephyr Theatre 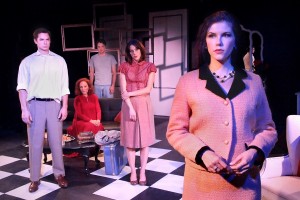 I’ve always liked a good horror story, and Wendy MacLeod’s 1990 play The House of Yes fits the bill quite nicely, though not in the way one might expect. This is essentially a domestic drama twined with a morality play, lacquered over with a spooky gothic glaze. It’s a combination that works well when done right, and Director Lee Sankowich’s 25th-anniversary revival at the Zephyr Theatre very much qualifies.

The story follows a strange, insular upper-class family that has seen better days. Their home is in suburban D.C., across the way from a Kennedy home — another family whose ill fortunes form an allegorical framework for the play. The setup brought to mind the 1975 documentary Gray Gardens, a fascinating look at a reclusive mother and daughter — former socialites both named Edith Beale — who were the aunt and first cousin of Jackie O, which also happens to be the name of the main character in The House of Yes.

While watching the drama unfold, I also couldn’t help thinking about Poe’s The Fall of the House of Usher. Many of the elements that make that story worthwhile are here too: an insane sister, a threatening storm, an unassuming newcomer visiting a claustrophobic family house from which escape is difficult, if not impossible. Admittedly, one does not have the pleasure of watching Vincent Price as the Master of Ceremonies, but the actors perform at quite a high level nonetheless.

Kate Maher, a striking-looking brunette, is well cast as Jackie O, the troublesome daughter who is at the heart of the action. Jackie, we learn, is now living at home again after certain “episodes” that landed her in the mental hospital and require her to be on medication. Jackie, along with her brother Anthony (Nicholas McDonald) and her sociopathic mother (Eileen T’Kaye), awaits the arrival of her twin brother Marty (Colin McGurk), who has been away and is bringing his new fiancée Lesly (Jeanne Syquia), a waitress at a donut shop. Lesly, innocent and simple, is everything that Jackie is not, and she is made to feel most unwelcome by the callous mother and daughter. Brother Anthony is the only one who seems to warm to her, but only because he is smitten with her and wants her for himself.

It seems that the family patriarch mysteriously disappeared the same day President Kennedy was assassinated and the twin siblings, conflating the two losses, developed a sick childhood game, dressing up as the President and First Lady to replay the assassination over and over again. Thanks to Anthony’s revelations, Lesly learns that these childhood reenactments have spilled over into something even more unwholesome. Suffice to say that everyone involved, including Lesly, has something to hide and their bad behavior reflects the moral rot within.

The pacing is quick, intercutting between the living room and guest bedroom, adjacent on the set, but separated by clever use of lighting. The House of Yes was adapted into a 1995 movie starring Parker Posey as Jackie and Tori Spelling as Lesly (which has developed somewhat of a cult reputation), but I’d recommend seeing this play for an even greater emotional wallop, partly thanks to the up-close and intimate setting at the Zephyr Theatre.