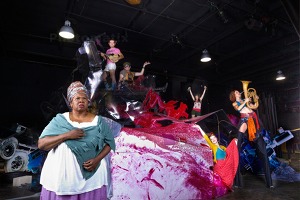 Let’s get this out of the way right up front: Crescent City is a difficult piece, and it’s not for everyone. It’s not being uncharitable to say it’s not even for most. That said, if you fancy yourself a connoisseur of the avant-garde, then this one’s for you! There is a snootful of ideas percolating in composer Anne LeBaron’s new “hyperopera,” and it is worthwhile to make it out to Atwater Crossing if you are interested in what is happening at the bleeding edge of modern theatrical performance art.

When theater of this conceptual density arrives in SoCal, you can safely bet it has something to do with CalArts and this is triply true with Crescent City. LeBaron is a professor of music and theater at the college; librettist Doug Kearney teaches poetry there; and producer Laura Kay Swanson is an alumna. The one non-CalArts figure that figures prominently in this piece is the director, Yuval Sharon, recently moved to LA after four years running New York City’s VOX, a showcase for new American opera. He was also assistant director to Achim Freyer for LA Opera’s recent Ring Cycle, which, for anyone who saw that, will give a clue about his modernist sensibilities. The company he has created with Swanson — The Industry — is devoted to new and experimental opera-like productions.

According to the composer (who coined the term), a hyperopera is a deliberately collaborative work that eschews the idea of one artist largely controlling its creation. Hyperopera loosely follows the conventions of traditional opera — an amalgam of singing, acting and stagecraft — but expects each contributor to create a work that can stand by itself as “art.” In Crescent City we have, of course, the music. In addition, there is the poetry of the libretto, the physical and vocal expression of the actor/singers, the conceptual framework of the director and the six major art installations (created by Mason Cooley, Brianna Gorton, Katie Grinnan, Alice Könitz, Jeff Kopp and Olga Koumoundouros) that comprise the set. The result is a multi-layered opera that sometimes overwhelms with its thick mix of messages.

Here’s the basic setup: In a 25,000-square-foot warehouse, six large art installations are spread out. They represent a graveyard, a hospital, a swamp, a junk heap, a shack and a dive bar. These are available to be viewed as stand-alone artworks during the day. For performances, audiences are positioned on the perimeters of the space with some scattered around the dive bar on floor cushions as well. Along the back walls, there are no chairs and audience members are encouraged to move about to seek other perspectives. Three large screens carry the supertitles of the libretto and also show the main action via a series of stationary cameras plus two mobile cameras carried by silent characters. Sometimes, the images present what is happening onstage, other times they depict films recorded prior with cast members; in this way we are getting another artwork — semi-improvisational video — along with all the rest.

The story line is somewhat abstruse, but involves a mythical city — presumably New Orleans — after a great natural disaster — presumably Hurricane Katrina. The bad floodwaters have resurrected Voodoo priestess Marie Laveau (played by contralto Gwendolyn Brown), who emerges from her tomb to help save the city. The ancient Voodoo spirits have also been loosed upon the ruined landscape, and together, like Diogenes, they seek amid the roaming hustlers, drug dealers and debauchés an honest man to see if the city is worth redeeming. They ultimately find him (The Good Man is played by bass/baritone Cedric Berry), but he too turns out to be morally compromised, and the future of the city remains unclear.

The narrative aspect of Crescent City appears to have less emphasis than the process of “making theater,” so no need for concern if you feel like you are not getting it. It demands a lot of attention to successfully sort out all the threads that are presented; you find your eyes darting from the monitors, to the right, to the left, trying to take in everything that is happening. More compelling than the sluggish story line is the close physical presence of the singer/performers. You can really feel the power of their voices as they pass within a few feet of you. This is an experience you will never get at a traditional, big-production opera.

Every opera is distinguished by its music, and Crescent City is no exception. LeBaron has cooked up a complex, exotic, polyrhythmic gumbo of sound played by a live orchestra of 16, including Timur and his Dime Museum. Included are clarinet, piano, banjo, accordion, chromelodion, percussion and shakuhachi, as well as tuba, trombone and trumpet to help keep us rooted in a distinctly New Orleans vibe. As the movements play out, you can hear bits of atonal jazz, zydeco, electronica, waltz, twelve-tone and barrelhouse, and I’m sure much more that I could not even guess. A little something for everyone. Synthesizers create a chaotic accompaniment of buzzes, screeches and clashing, discordant non-Western temperaments. It’s Preservation Hall on acid. Adding to the sense of dislocation, the notes the singers intone often do not follow the pitch of the music in any traditional fashion; the musical intervals are alien and unexpected. This chaotic, cockeyed, cacophonous music is a good aural representation of what is happening in Crescent City, but don’t expect to leave the theater humming anything.

There is an unrelenting darkness and pessimism that pervades the production. Humor, if it is to be found at all, is just grim irony. The city is nearly deserted except for revelers and lowlifes. Water — normally life-giving — becomes a malevolent force, the cause of drowning, capsizing and ruination of families. Occasional snatches of other works surface — the dance of death from Bergman’s Seventh Seal and the bierkeller scene from Cabaret come to mind — highlighting the allusive “meta” nature of the production.

While Crescent City is a serious piece and it is obvious a lot of work and thought has gone into it, both the direction and the music can feel somewhat academic and theoretical at times. Some things seem to be done just for the sake of seeming clever: Behold, Mongolian time signatures combined with Indonesian gamelan scales. Move around, audience, and change your perspective so you can see… the other side of an object you have already seen. Here is Brecht, there is Pirandello. None of the theatrical devices are exactly new, but they are certainly stacked high. In the end, there seems to be a lot of sound and fury, signifying… what, exactly? Any meaning derived is strictly up to the individual.

Even if all these disparate parts don’t hang together as well as they might, the artists at work here are to be applauded for creating one possible way forward from the ossified, if enjoyable, canon of traditional opera. Some of the images are indelible, and it is a production you will not soon forget. And that is saying something in today’s opera repertoire.

The Industry presents its inaugural production, Crescent City, through May 27 at Atwater Crossing, 3245 Casitas Ave., LA 90039. Show times are Thursdays through Sundays at 8 p.m. For more information, visit http://theindustryla.org. For tickets, visit http://www.brownpapertickets.com/event/222549.