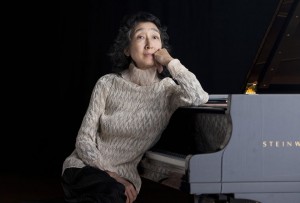 On Saturday night, the Los Angeles Philharmonic under the direction of its music director, Gustavo Dudamel, performed a concert of orchestral works by Robert Schumann, including the Piano Concerto in A minor, Op. 54 and the Symphony No. 2 in C major, Op. 61. This concert was the second part of the Schumann Focus series in which Dudamel and the Phil are performing all of the symphonies and concertos by the Romantic composer.

Dudamel and the Phil were joined for the piano concerto by celebrated pianist, Mitsuko Uchida. The Schumann concerto is a fiery, Romantic piece. Dudamel and Uchida, however, gave the audience an understated version of the concerto, which was more in line with Uchida’s legendary performances of the Mozart piano concertos with Jeffrey Tate. Dudamel kept the orchestra extremely quiet so that it was possible to hear Uchida’s muted, but delicate performance. At one point late in the third movement, Uchida had difficulty keeping up with the tempo, and Dudamel had to look over at her and slow the orchestra down a bit. There were a few noticeable mistakes also, but that didn’t detract from what was an otherwise marvelous performance. At the conclusion, Dudamel and Uchida competed to see who could be the most humble. Of course, Dudamel won, allowing Uchida to receive the admiration of the audience. She returned it in kind with an encore — an ethereal performance of the Sarabande from the French Suite No. 5 in G Major, BWV 816 by Bach.

Dudamel concluded the concert with the second symphony. Speaking of tempo, Dudamel might have been thinking of the Preakness, which was run earlier in the day, because he took the three fast movements (1, 2 and 4) at as quick a tempo as I’ve heard. He also had the two horns and trumpets stand out which gave the performance an air of 18th-century orchestra about it. Dudamel did not take any liberties with Schumann’s score and played it straight, albeit fast. The overall effect was like a shot of adrenaline! And the audience definitely felt it.

We are looking forward to the next installment of the Schumann Focus series on Thursday with a performance of the Symphony No. 3 in E-flat major Op. 97, “Rhenish.” Also on the program will be the Overture to Genoveva, Op. 81, and the Cello Concerto in A minor, Op. 129 with soloist Sol Gabetta. The concert will be repeated on Friday. The series will conclude on Saturday and Sunday with the Symphony No. 4 in D minor, Op. 120 along with the Genoveva Overture and the Cello Concerto.