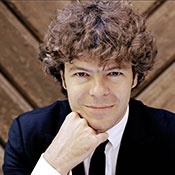 The 38-year-old Spanish conductor Pablo Heras-Casado was in town on Sunday to lead the LA Phil in a sonically spectacular program of works by two masters of composition and orchestration: Ravel and Stravinsky.

Heras-Casado began the matinee concert with a light but crisp performance of Ravel’s delightful 8-minute Alborada del gracioso. It was a perfect aperitif that wafted through the hall like the cool breeze outside. The long bassoon solo was played wistfully by LA Phil Principal Whitney Crockett.

The first half concluded with a performance of Ravel’s Piano Concerto in G. The soloist originally scheduled was the French pianist Pierre-Laurent Aimard, but he had to withdraw because of a family emergency. Stepping in at the last minute was the Spanish pianist Javier Perianes. The two Spanish compatriots delivered a scintillating performance of the Ravel. Perianes’ playing was not flashy, but rather understated. And, along with the relatively small orchestral ensemble, this gave the concerto a chamber music feel. Heras-Casado’s accompaniment was at times a little overbearing, perhaps, in part due to Perianes’ somewhat muted playing. But the overall effect was a kind of relaxed exhilaration. And, once again, Whitney Crockett reminded us how beautiful a bassoon solo can be.

The major work on the program was Stravinsky’s The Firebird. For those who are only familiar with Stravinsky’s 1919 suite from the ballet, hearing the entire piece may have seemed a bit long, but because Stravinsky’s shorter suite includes music from different segments of the larger score, the listener would have been rewarded many times for listening to the unfamiliar parts by hearing the familiar parts. After hearing the score in its entirety, one can understand why it catapulted Stravinsky from a young unknown composer to the ranks of the elite.

For those who only or mostly like to hear the LA Phil when Dudamel conducts, you’re missing some great up-and-coming young conductors. We’re likely to see (and hear) Heras-Casado again.