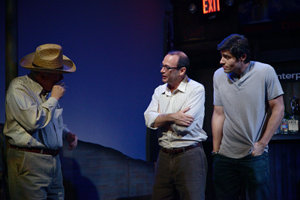 Staged as theater in the round (except with half the audience lighted as part of the action), this talented troupe of actors, smartly directed by Ken Sawyer, reenacts interviews and conversations conducted by the Tectonic Theatre Project led by the incomparable Moisés Kaufman in this, a 10-year follow-up to Kaufman’s original “The Laramie Project.”

In the aftermath of the brutal hate crime murder of 21-year-old Matthew Shepard in 1998; Kaufman, playwright and founder of the Tectonic Theatre Project, sought to interview the various townspeople of Laramie, Wyo., in an attempt to make some sense of this senseless homophobic tragedy.

With most playing multiple roles (and successfully differentiating their individual roles via a singular piece of clothing, a spot-on accent or a specific physical tic), it’s hard to single any one actor out. Kudos to all for seamlessly switching characters quite believably in a blink of an eye. The heavy lifting, though, seemed to be carried most effectively by Ed F. Martin as Kaufman and a wide range of others, and Paul Witten as Greg Pierotti, one of the co-playwrights/TTP member and many others. Paul Haitkin went from sympathetic gay to apathetic hetero. Elizabeth Herron from dynamic politician to quiet anti-hate crime activist/mother Judy Shepard. Carl. J. Johnson from redneck local law official to concerned co-playwright/TTP member. Ann Noble from defensive local newspaper editor to caring co-playwright/TTP member. Christine Sloane elicited much empathy as the loving grandmother of one of the murderers. Che Landon especially shined as Shepard’s BBF Romaine Patterson amidst her multiple roles.

Michael Hanson and Dylan Seaton alternate the two roles of the convicted Aaron McKinney and Russell Henderson. At the performance I attended, Hanson chilled as the impossibly sympathetic, weak-willed McKinney, co-conspirator of Shepard’s demise, and Seaton riveted as Henderson, the unremorseful torturer/murderer of Shepard.

Some people in Laramie asked: “Why keep bringing up Matthew Shepard? Just move on.” The Tectonic Theatre Project and Judy Shepard say never forget and learn from the tragedy. Wow! Just Wow!