Review: ‘The Last Days of Judas Iscariot’ at the Hudson Theatre 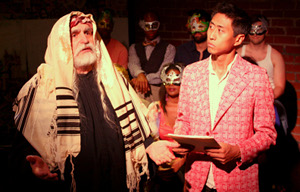 A not completely satisfying revival of award-winning playwright Stephen Adly Guirgis’ “The Last Days of Judas Iscariot” currently plays at the Hudson Theatre.

Guirgis updates the story of Judas, using Iscariot’s point of view, as he goes through a modern-day trial in Purgatory. With evidence and eyewitnesses against Judas, must he be condemned to Hell? Or can he be forgiven and allowed to enter the pearly gates of Heaven? Can Judas forgive himself?

With judicious editing down, the two hours and 15 minutes of continuous monologues would drive the plot forward more clearly. Speeches run on so long that, while you can appreciate the actors’ command of the script, you lose sight of where each monologue is leading.

Josh T. Ryan directs with a light touch, allowing his actors to utilize whichever style of acting they choose: slapstick — Robert Paterno as the prosecutor and Brian Robert Harris as the Bailiff; high-drama — Marc Erickson with his entertaining, over-the-top Satan; and realistic drama –Sarah Ruth Ryan as the defense and Cooper Daniels as Jesus.

Also making impressions with their characters are: Keedar Whittle with his commanding Kanye West version of Pontius Pilate, Alex Walters in two hilarious roles as Sigmund Freud and a sympathetic juror named Butch, and Melissa May offering witty retorts as Sister Glenna. Robert Walters displays effective, justifiable guilt in the title role when his Judas finally comes out of a coma.

Canvases of Annie Terazzo’s portraits make up the backdrops of the stage.

Instead of a curtain call, a photo of Trayvon Martin is brought out to center stage and a votive gets lit in front of it.