Review: ‘The Last Vig’ at the Zephyr Theatre 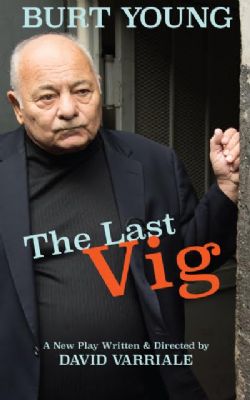 “The Last Vig” has an intriguing premise: How does an aging, faded Italian mob boss cope with the changes modern society hath wrought? Applied to this premise in the lead role at the Zephyr Theatre in West Hollywood is the familiar and respected character actor Burt Young, known for his work in such films as “Once Upon a Time in America,” “Chinatown” and, especially, “Rocky,” for which he received an Academy Award nomination. I’m a sucker for last-of-a-dying-breed stories, but this one left me indifferent, and a bit frustrated.

First, the good stuff: the set is great. It is the ramshackle back storage room of a one table Chinese takeout joint somewhere in New York’s Chinatown. Every time the door is opened, we see jets of steam and hear the Cantonese chefs chattering. It is also the office of Big Joe, a septuagenarian Italian “Family” man who is one of the last remaining wiseguys of his generation. Big Joe sits at his old desk and fields occasional phone calls from his wife, while his young assistant Bocce pours drinks and polishes glasses at the makeshift bar.

Most of the acting is pretty good as well. Ben Adams as Bocce is a delight to watch, bopping and weaving through his daily routines, with non-stop hip-hop pumping through his earbuds. Gareth Williams is also fun to watch as Big Joe’s fixer, Jimmy D. His costuming is pitch perfect with his silver coiffed hair, pinky rings and nylon tracksuit. He is the one tasked with delivering the $100,000 Big Joe owes to the Miami cartel. Clint Jung as the Chinese immigrant restaurant owner and Bruce Nozick as the Detective also do a good job adding to the verisimilitude of the set and the characters.

Surprisingly, the actor I thought the most interesting, real and affecting is never seen — it is Big Joe’s wife Rose Marie, voiced by Lizzie Peet. Her voice comes through an old phone amplifier, the kind that fits the mouthpiece and earpiece of old phones. She communicates with a no-nonsense, outer-boroughs directness that reminds me of Cathy Moriarty in “Raging Bull.” Her concern and affection for her aging husband (and his obvious soft spot for her) represent some of the most affecting moments of the play.

But it is Big Joe that is at the center of the play, and Burt Young seems nebulous and unfocused in this important role. Young is 76 years old now, and I have no idea how, in his real life, this burly, round-faced, rough-around-the-edges actor is coping with his age. He doesn’t have any trouble remembering his lines, but his delivery is weak, without vigor or passion. He mumbles, croaks and whispers most of his lines, only a couple of times raising his voice to holler at unseen characters in the front room. Even though one of the characters makes a crack about Big Joe’s senility, it is difficult to be sure that the weakness we see is all acting.

During the intermission, I asked a couple of other attendees what they thought about Young’s performance, and the unanimous agreement was that he was struggling somewhat with his delivery and, especially, his enunciation. I’ll leave it that if his feebleness was indeed all an act, it was a hell of a good one, but it did not help buoy the play.

David Varriale wrote and directs the play, and I give him kudos for having a fair understanding of this nearly extinct subculture. New York has a colorful history of old wiseguys who used to roam the streets of lower Manhattan in their bathrobes, looking like kindly grandfathers rather than the calculating crime bosses they really were. The dialogue is earthy and imbued with that “New Yawk-ese” that everyone knows from countless movies. The characters are a bit more cardboard cutout though — the cop on the take, the Chinese immigrant who knows more than he lets on and the slick fixer. Only Bocce seems really unique.

The play just kind of ends without any big reveal or surprise or turnaround or resolution, and that is frustrating because it feels like something more profound could have been said about what this subculture meant, and what we are losing or gaining by its disappearance. Nevertheless, “The Last Vig” has enough moments of humor and drama, as well as flashes of the endearing Burt Young of old, to merit a watch.