Review: ‘The Man Who Came to Dinner’ at the Actors Co-op David Schall Theater 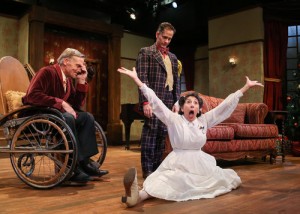 The printed edition of The Man Who Came to Dinner starts with the inscription “To Alexander Woollcott, for reasons that are nobody’s business.” And therein lies a tale. (One brought to the David Schall Theater by the Actors Co-op Theatre Company, through Dec. 17.)

Woollcott was a well-known theater critic, radio host and raconteur in the 1930s. He was also the model for the scathing, arrogant and indelible lead character Sheridan Whiteside in George Kaufman and Moss Hart’s screwball comedy.

Apparently, Woollcott had come to visit Hart at his Bucks County, Penn., estate and promptly took the place over, installing himself in Hart’s bedroom, terrorizing the servants and making himself a general nuisance. Although Woollcott ultimately chose not to play himself in the opening run on Broadway in 1939, he eventually did step into the lead role in a West Coast production.

The Man Who Came to Dinner revolves around the story of the nightmare guest who never leaves, and that man is the aforementioned Mr. Whiteside, nicknamed Sherry. Fortunately, Director Linda Kerns made an excellent choice in casting Greg Martin for the linchpin role.

While Martin does not affect the ridiculous physical accoutrements of some of his predecessors in the role (e.g., Van Dyke beard, monocle and cigarette holder), he does capture all the right notes of superiority, contempt and superciliousness that the role demands.

A sampling of some of his choice lines:

“Will you take your clammy hand off my chair? You have the touch of a love-starved cobra.”

“I simply will not sit down to dinner with Midwestern barbarians. I think too highly of my digestive system.”

“Strange? She’s right out of The Hound of the Baskervilles.” (referring to Harriet, the spinster aunt)

The basic setup is that Sherry has injured his hip in a fall outside the home of factory owner Ernest Stanley and remains in a wheelchair for most of the play while he recovers. Attended to by a local doctor, a nurse and his secretary, Whiteside commandeers the house, inviting a series of ever more bizarre “friends” to pay him visits. Among those are a trio of convicts, a scheming blonde bombshell and a clownish comedian named Banjo, a role written for Harpo Marx, who later joined several productions outside New York.

Apropos Harpo, anyone familiar with the rapid-fire verbal rhythms of the Marx Brothers will recognize the same type of schtick in The Man Who Came to Dinner. That is largely due to the influence of co-writer Kaufman, who was one of the most talented of the collaborators who worked with that legendary fraternal comedy team. He was the master of the gag, the bit, the wisecrack. He was in such demand as a collaborator that there was not a single Broadway season between 1921 and 1958 that did not feature a play that Kaufman either wrote or directed.

Co-writer Hart, on the other hand, is often more credited as the specialist who serves up the sentimentality and emotional nourishment that makes audiences care about the characters. To that end, there are no less than three romantic subplots that keep the whirlwind spinning. But they don’t amount to much — they feel more like padding in between the setups, punchlines and bitchy barbs.

With a cast of 18, The Man Who Came to Dinner draws deep from the bench of the Actors Co-op Theatre Company, and everyone appears to be having a rollicking good time. The zany spirit is infectious, and there’s hardly any chance to be bored. I felt a couple of the actors could have milked more laughter and ridiculousness inherent in their characters, but overall the performers largely found the hooks that made their characters fun and memorable.

Kaufman once said: “I never want to go any place where I can’t get back to Broadway and 44th by midnight.” As a former New Yorker of a certain age, I can appreciate the New York theater-centric world that Kaufman and Hart portray and satirize. Many of the characters are analogs to some real personages of a New York long gone. In addition to Whiteside and Banjo already mentioned, the character of Harriet Stanley was modeled on Lizzie Borden, and the character of Beverly Carlton was modeled on Noel Coward. Other real life personages that figure as characters are unknown to me, such as Dr. Gustav Eckstein and Gertrude Lawrence.

Ultimately, not so long from now, audiences will no longer recognize any of the blizzard of names thrown about so casually. It’s such a play of its time. But strong writing, witty humor and memorable characters are forever, and as such, it would seem that as a successful piece of theater, The Man Who Came to Dinner has a long life ahead of it.