Review: ‘The Manor’ at the Greystone Mansion 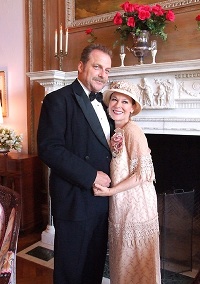 Theatre 40 successfully mounts its 200th-plus performance (in 12 years) of Kathrine Bates’ “The Manor.” Playwright Bates has fashioned an intriguing three-hour tale based on the wealthy Doheny Family during the 1920s (Act I) and 1930s (Act II). The audience actually follows the action, moving from room to room in Doheny’s mansion, the Greystone Mansion in Beverly Hills.

The strong cast of 12 flesh out this early-20th-century soap opera, with Darby Hinton commanding as the patriarch Charles MacAlister. Bates double duties as matriarch Marion MacAlister, the staunch woman behind her man.

The primary conflict gets set in motion when the Senator proposes a can’t-lose, but obviously shady, deal (in the guise of a patriotic gesture) to Charles. Uninvited guests Gregory and his wife ramp up the underlying, entangled romantic tensions between the love triangle of Abby, Sean and Gregory. Respective sexual dalliances are implied, but not confirmed or pursued.

Two stand-outs, for different reasons, in this otherwise uniformly able ensemble are MacQueen and Lavoisier. In the arena of the welcomed and appropriately over-the-top soap opera emoting, MacQueen skillfully underplays her Cora, vividly exhibiting all the pride of her husband’s influential political position, all the support of a loving spouse, all the shame of a duped accomplice, all the guilt of having ruined her good friend’s legacy, all the humiliation of a disgraced felon’s not-all-unknowing partner. MacQueen’s conciliatory scene with Bates’ Marion adroitly exposes the deeper, intimate feelings of friendship that bind these two women, who are more similar than either want to admit. Brava, ladies!

Lavoisier as the MacAlisters’ privileged golden boy plays his initial feeling very close to the vest. It’s hard to determine what this character’s actual reaction is to his father’s wedding present of the mansion. Trapped? Grateful? Suspicious? It’s also difficult to decipher his apprehension on consummating his marriage. Trapped? Grateful? Not interested? Lavoisier is most revealing in his scene reassuring his mother of his father’s capability of bouncing back on his feet to reclaim the MacAlisters’ financial and social footing.

Kudos to Bates’ gorgeous period costume dresses for the women and the proper uniforms for the house staff. Tip of the top hat to Director Flora Plumb for timely coordinating each set of three scenes to simultaneously play for three different audience groups, while keeping the overlapping plotlines fairly clear. Greystone’s high vaulted ceilings made for wonderful acoustics for actors that project, and this troupe does that very well.