Review: ‘The Mystery of Irma Vep’ at the Falcon Theatre 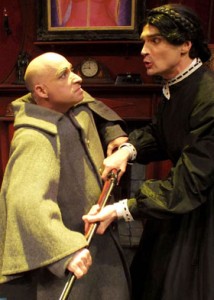 The Falcon Theatre wows with its current hour-and-45 of non-stop, sidesplitting hilarity: Charles Ludlam’s 1984 “The Mystery of Irma Vep.” Two very talented and versatile actors, Matthew Floyd Miller and Jamie Torcellini, inhabit multiple roles using the utmost of their physical comedy expertise and impeccable comedic timing to delight the audience with the high jinks of a stormy night in a haunted mansion frequented by vampires, werewolves and ghosts.

The clever quick-changes with voices offstage and action onstage keep the performance always smoothly moving forward. Miller and Torcellini play off each other so well, even their minor flubs (or are they?) enhance the comedy of the moment (for example, Miller’s fake moustache flopping loose on his upper lip, the double takes for a candlelight or tea kettle cue coming a beat behind, a slipped wig, vamping of stage business when the other is offstage taking a little longer in a quick change). Miller and Torcellini channel the comic genius of Harvey Korman and Tim Conway, who displayed magical chemistry in their constant quest to crack each other up on “The Carol Burnett Show.” Get these two on SNL — well, the earlier, funnier version!

Originally, Ludlam wrote this double entendre-laden piece for himself and his longtime companion Everett Quinton. The script is no easy task to perform, as one character’s exit lines are timed with another character’s entrance, with the occasional illusion of three characters actually interacting onstage. But Miller and Torcellini succeed!

The evening opens with the mansion’s staffers, Jane (Miller) and Nicodemus (Torcellini), awaiting the arrival of their employer Lord Edgar (Miller) and his new wife Lady Enid (Torcellini). Nicodemus exits as Lady Enid enters. Jane leaves the room as Lord Edgar comes in. And so it continues; each actor leaves the stage as one character before returning almost immediately as another. Repeatedly. Uproariously! With each character distinct from the previous one.

I would love to watch the performance from backstage. I can only imagine the frenetic goings-on necessary to make all the entrances and visual cues seem seamless onstage.

Did I mention this was funny?