Review: ‘The Navigator’ at the Actors Complex Let Live Theatre 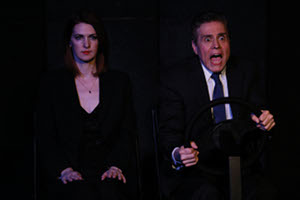 Kelly Anne Burns and Joseph Franchini star in the West Coast premiere of the Burning Clown Production of “The Navigator” by Eddie Antar, now playing at the Actors Complex Let Live Theatre. / Photo by Rich Clark

Playwright Eddie Antar deftly relates the story of Dave in his desperate attempts to maneuver his family out of unemployment and prevent home foreclosure — all while driving his car with a unique GPS feature, The Navigator. It not only responds to his voice commands, but also predicts answers to his various challenges. Think “Jeopardy,” in which the answers present themselves before the questions.

Coming from the original New York production, actors Joseph Franchini (Dave) and Kelly Anne Burns (The Navigator) nail their respective roles as driver and disembodied voice GPS. Franchini very believably plays Dave’s range of emotions, which run the gamut from elation to frustration to wondering if he’s lost his mind as he continues conversing with his car, ultimately becoming dependent on her responses.

Burns has the artificial intelligence voice, sound effects and head twitches down pat! Think of the announcements in airports instructing where to park, where to walk, not to smoke — all in a reassuring, soothing female voice. It is easy to buy into the play’s conceit of having Burns sitting in plain sight in the passenger seat, body completely motionless, voicing the monotone, emotionless, navigational responses. Burns spouts out seeming non-sequiturs (i.e., stay, Raven, decline, buy) before Dave figures out the corresponding questions which lead to consistently winning long-shot bets, right decisions and relation saves. Amazingly, Burns’ only body movement besides her comically timed head twitches and head drops (system off) is when her left hand moves to act as a cup holder for Dave’s slurpee. Too funny!

Heidi Jo Scheller gives a wonderful three-dimensional portrayal of Dave’s wife Lily. Married to Dave for years, she has stuck by him through bad judgments (one fatal) and a shrinking bank account. Lily, only via phone conversations with Dave in his car, emotes joy over his new employment, suspicion about his extracurricular activities, motherly concern about their teenage daughter caught doing drugs, despair over being trapped by a loser spouse. And in a quick about-face, Scheller limns a bubbly travel agent conversing with Dave via his bluetooth.

The fourth wheel of this very smooth ride, Mike Smith Rivera, skillfully plays three roles, the main one being Dave’s stockbroker Al — all communicating with Dave solely via his car phone (until the climactic scene when Al hops in the passenger seat).

How refreshing to experience a new idea and story executed so cleverly! Go see this!

“The Navigator” continues through June 29 at the Actors Complex Let Live Theatre, 916A Formosa Ave., Hollywood. For tickets, visit www.thenavigatorplay.com.