Review: ‘The Normal Heart’ at the Fountain Theatre 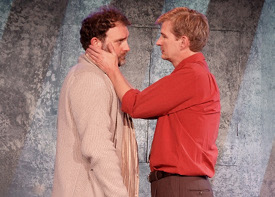 Having seen a number of past productions of Larry Kramer’s “The Normal Heart,” both equity and equity-waiver, throughout the years, the Fountain Theatre’s current production, unfortunately, does not rank as one of the strongest. Possibly truer to Kramer’s actual behavior than other theater companies have attempted, this production makes for a very lopsided drama.  Whereas other productions worked effectively as ensemble pieces in recounting the beginnings of AIDS, this seems more like a one-man show, with background characters.

Director Simon Levy gives full rein to Tim Cummings in his full-on ranting and raving as the lead character Ned Weeks (the alter ego of playwright/activist Kramer). Bravo to Cummings for giving 150% of his commitment to portraying Weeks/Kramer as a man with complete tunnel vision in his passionate pursuit to educate the public on the deadly epidemic. His Weeks/Kramer is totally devoid of people skills, without any smidgen of likeability or any redeeming human qualities. Weeks’/Kramer’s high-voltage tantrums put off any iota of sympathy for the man or his mission — to get the word out to gay men to stop having sex to prevent the spread of what’s later to be known as AIDS. Cummings, at full-volume histrionics, skews the play very one-sided as one man — Weeks — not only against the establishment but also against his compatriots in the campaign he initiated.

Lisa Pelikan, better in past roles, also seems to be given full rein in the loud-and-louder approach of making any serious points as Dr. Brookner, the only doctor who’s treating and recognizing the severity of the impending health crisis.

Stand-outs in this talented ensemble include the “calmer” characters. Bill Brochtrup as Felix, Ned’s new lover, commands the stage with his quiet, intense, sometimes-playful presence. It’s difficult to understand what Felix sees in Ned as a possible lover. Ned’s so preachy, confrontational and non-approachable on their “first date,” Brochtrup really has to act up a storm to make the audience believe his character would be the least bit interested in Ned.

Matt Gottlieb makes the most of his stage time as Ned’s loving, but conflicted brother Ben. Does Ben not accept Ned because Ned’s gay? Or because Ned’s an a**hole? The way Levy directed Cummings, I would venture the latter would be correct.

Fred Koehler surprises with his intensity in the second act as Mickey, a devoted follower of Ned’s cause and the level head of reason in the troupe. Koehler grabs the spotlight with his wrenching revelation to his fellow volunteers that he just might have lost his job — due to Ned’s actions.

The other level-headed volunteer of this group is Tommy, played by Verton R. Banks, who provides great rationalizations and brings needed comic-relief. Stephen O’Mahoney essays the stoic in-the-closet Bruce, the photogenic face of Ned’s organization. Dan Shaked and Jeff Witzke support in their multiple roles.

Kudos to Adam Fleming’s enlightening video projections of dates, places and death statistics. And, even though the scene changes were quick and smoothly executed, various props distractingly remained on the stage floor for subsequent scenes.

I just hope the movie version of “The Normal Heart,” directed by Ryan Murphy to premiere next year on HBO, gives more balance and offers more chances to sympathize with and/or love the protagonist.