Review: ‘The Pain and the Itch’ at the Zephyr Theatre 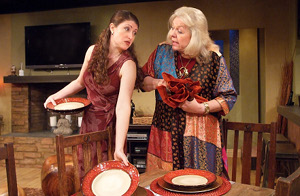 Building a story around an unlikeable character is a little like building a boat out of corn husks; it will float for a while, but is eventually destined to become waterlogged and sink. In order to hook us and keep us wanting more from a character, the writer must offer us at least one redeeming quality. Think of Humbert Humbert from Lolita. He is on a fundamental level a child molester, but also a man with humanity and psychological depth. In “The Pain and the Itch,” playwright Bruce Norris has given us not one, but a cast full of odious characters. Unfortunately, few have any redeeming qualities that might make us glad we got to know them.

As a Pulitzer Prize-winning playwright (for “Clybourne Park”), Norris should know better, but perhaps he was just having too much fun with his premise of a dysfunctional family together for Thanksgiving. The concept has the potential to be highly amusing, but the fun wears off quickly when you keep wondering whom to hate more: the cowed, browbeaten, angry husband; the abusive a-hole of a brother; the condescending, bossy wife; or the continually shrieking 8-year-old daughter. We hold out hope that some real, vulnerable person will emerge from within these evil personae as a result of a realization or a catharsis — but it never happens.

Luckily, there are two characters that intrigue and hold promise: the flashy, tell-it-like-it-is, young Russian girlfriend of the brother (played with delicious insouciance and a spot-on accent by Beth Triffon) and a mysterious Muslim man who lurks silently on the perimeters for most of the play (played with quiet dignity by Joe Holt). The semi-loopy mother played by April Adams also had some worthwhile moments.

In the first half of the play, a series of mysteries keep us wondering where everything is going. Husband and wife are upset by gnawed-on avocadoes found in the house, believing there are large rodents roaming; the Muslim man is weeping to himself; the daughter has a strange infection, etc. The mysteries are resolved in the second half, nearly at the end, but finally understanding what is going on does not provide much sense of satisfaction or delight.

The themes that emerge revolve around how we are perceived as individuals and as groups and the attendant misperceptions. We meet immigrants who see America as a place of safety and opportunity versus Americans who can focus only on what annoys them and continually squabble among themselves. Actually, if you think of the goings-on in Congress these days, it can make for an apt metaphor, but somehow I don’t think this is what the playwright had in mind.

It is also evident that the play (supposedly set in Pacific Palisades) is meant to be a scathing indictment of what one might call phony liberal values. But I think that if the playwright really wanted to give pause to the progressives who may actually be in attendance, he would have had to create characters that the viewers could relate to and maybe even see a bit of themselves reflected. The fact that the (American) characters are played so broadly as stupid, venal and craven is unlikely to offer fertile ground for those prone to epiphanies.

Director Jennifer Chambers has put together the dramatic components professionally: The production values are quite good — a well-furnished living room set, effective lighting and evocative music. It’s a small theater, so you are never more than two rows away from the action, which is always an advantage of small theaters. The play is lively, certainly — there is a lot of sturm und drang and people rushing about. And yes, there are laughs to be had. It is an adult play — there is a running gag where porn is accidentally launched on the living room TV. But in the end, is it merely a tale full of sound and fury, signifying nothing? Judge for yourself.