Review: ‘The Superhero and His Charming Wife’ from Not Man Apart at Highways Performance Space 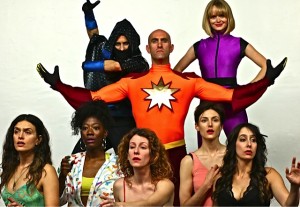 "The Superhero and His Charming Wife" takes a surreal spin at Highways Performance Space. / Image courtesy of Not Man Apart Physical Theater Ensemble

You never know what you’re going to find at the myriad of “99 seat” theaters in Los Angeles. On any given weekend night, you can choose from romances, comedies, character studies and personal odysseys, to name a few. What you don’t normally find much of is so-called Theatre of the Absurd. Maybe because it’s difficult to pull off successfully, or simply that most playwrights don’t think this way. But when it succeeds, as does with “The Superhero and His Charming Wife,” onstage at Highways Performance Space in Santa Monica through May 15, it makes for riveting and memorable theater.

Writer and director Aaron Hendry states, “The play is a dream I once had.” This is a subtle clue as to how things are going to proceed. Hendry is also co-artistic director of the Not Man Apart Physical Theater Ensemble, and by taking advantage of their particular talents in dynamic movement (the show is choreographed by Michelle Broussard), he has a vehicle to express surreal concepts not just verbally, but physically, which adds greatly to the impact of the play.

As ever the case with dreams, there is much at first that doesn’t seem to make sense or have a specific meaning. And the characters seem just as confused by what is happening to them. As more puzzlements pile up, one slowly begins to realize that the tools needed to help make sense out of chaos exist only at some deeper, subconscious level. As Hendry points out in the notes, there is an intuitive logic to dreams that often supersedes rational or even emotional logic and it mostly comes down to what feels right or true.

What feels true to me is that this play is mainly about momentous changes occurring in a relationship between a man claiming to be (and dressing as) a superhero and his wife. It opens with a solo narrator who describes himself as a demon explaining the Heisenberg Uncertainty Principle. From there, we plunge into what feels like scenes from a graphic novel. We meet Hero and his wife, Julie, in their apartment. Hero, as all superheroes, is a Gibraltar of confidence, control and security. He has no fear confronting the evildoers and villains of the world, but when his wife successively transforms into a series of different women, his own sense of certitude is scrambled.

It’s hard to know whether his wife’s transformation reflects a personality change that is preceding a breakup, or whether she has become mentally unhinged, or whether this is all in his mind. Maybe it’s all three. Whatever the case, we are taken on a mythic journey that pits Hero against nemeses such as the Dark Creeper, the Master Criminal and the Dirty Old Witch, while trying to figure out what is happening to his marriage. Could it be that these characters are the dark and malevolent parts of his wife, his relationship or even himself that he must face and overcome?

There are several points of interest that make this puzzling journey worthwhile. Number one is the Superhero, played by Jones Welsh. Welsh, another co-artistic director of the NMA ensemble, is a tall, physically imposing man with a shaven head and square jaw who is perfectly cast for this role. He uses his facility with acrobatic moves and his sonorous, commanding voice to convince us of his superhero status. Laura Covelli, yet another co-artistic director of NMA, is entertaining to watch as Changed Julie, who veers between hilarity and grief as a cook in a Japanese restaurant.

There are also several set pieces that are fun to watch. One is a kind of aerial ballet in which the Master Criminal (Alina Bolshakova) leaps and slides from a series of tables and benches held aloft by other performers. Another involves a mass of black plastic that grows to envelop the Waitress (Sydney Mason) and keeps on growing until it covers the entire stage, undulating and shifting with several performers underneath. It’s visually arresting and somewhat disturbing. That each of the performers has dance training is evident (Welsh and Hendry are both veterans of acrobatic theater troupe Diavolo).

The final scene takes us back to the thought experiments referred to by the Demon in the Prologue, indicating that there is indeed some certainty to things, as long as you believe there is. “The Superhero and His Charming Wife” is a rollicking trip through the subconscious and invites the audience along on the funhouse thrill ride of such a voyage. It may be absurd, but by keeping things on a personal level, it is good theater.