Review: ‘The Woman in Black’ at the Pasadena Playhouse 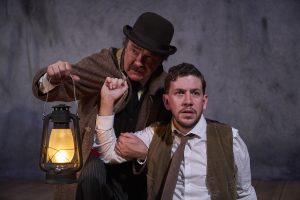 On opening night for “The Woman in Black” at the Pasadena Playhouse, a full house was laughing out loud, especially early on. Later, they were jumping in their seats, gasping and screaming. The play, which entertained more than 8 million people over 28 years (making it London’s second longest-running West End play), has come to Pasadena with its original staging. An awesome and chilling ghost story, it comes just in time for Halloween.

“The Woman in Black” is a ghost story in the very best tradition of gothic ghost stories, but it was actually adapted by playwright Stephen Mallatratt from the 1983 novel by Susan Hill. You probably missed the 2012 film version with Harry Potter’s Daniel Radcliffe — probably not a bad thing, since it got 66% from critics and a 54% audience score on Rotten Tomatoes. That could be because the magic of the stage version is that it feeds on the audience’s imagination. It’s like hearing a spooky tale told around a campfire. And in the play, you’re not watching the “real” thing, you’re watching actors pretend to be actors. Let me explain…

Robin Herford directs a cast of two on a spare stage. Bradley Armacost plays Arthur Kipps, a man with a tale to tell to exorcise demons from his past. Right at the start, Kipps starts reading his manuscript to The Actor, played by Adam Wesley Brown, whom he has sought out to help him dramatize the story for his family. Even though The Actor promises “We’ll make an Olivier out of you yet” (to which Kipps keeps insisting “I don’t want to be an Olivier”), The Actor takes on the role of Kipps through most of the play and Kipps takes on the minor characters. In other words, it’s a play within a play. Because the thin line between reality and imagination gets blurred, it makes the perfect format for a truly chilling ghost story, as well as a lot of laugh-out-loud bits.

The set consists of little other than a large wicker trunk that becomes a desk, a bed and a horse-drawn carriage; a couple chairs; a wardrobe rack; a door; and some furniture behind a scrim that becomes first a graveyard and then a room in the isolated mansion that Kipps, a solicitor, visits for his supernatural encounter. Beyond a projected outline of the haunted house, most is left to the imagination, including the eerie marshes, a train car and a dog.

Often, the lights are low, and sometimes they go completely dark. When Kipps wanders the house at night, his torch roams over the audience and creates creepy shadows as he enters and exits the room from which he hears strange noises. Some sudden, loud sound effects will make you jump. And the ghostly Woman in Black will make you cringe, gasp or scream, depending on the scene. (The audience doesn’t learn who plays the apparition until after the show when a headshot and bio on a small piece of paper is handed out at the door — interesting touch.) A few reveals along the way will have you gasping as well.

“The Woman in Black” is quite simply a masterpiece of theater, a literary ghost story told in the dark that plays on our fears and entertains in the way that only the best stories can. These are two entertaining hours I would gladly spend again.

“The Woman in Black” continues through Nov. 11 at the Pasadena Playhouse. Visit https://www.pasadenaplayhouse.org.